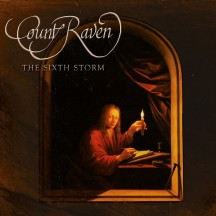 
It was 31 years ago when Storm Warning was released. Count Raven had a very fruitful decade during the ‘90s, releasing four albums but they also had really long breaks (or break-ups) after that. Hence their sixth LP, aptly named The Sixth Storm, comes in 2021, twelve long years after Mammons War.

Count Raven is a Swedish doom metal band and, since ‘doom metal’ is too encompassing a genre, I would say that their music has a rawer sound and feel of the Saint Vitus kind, rather than the epic one that Candlemass have. However, the main influence is ‘70s Black Sabbath and this is not just due to the actual songwriting, but also thanks to the voice of frontman Dan Fondelius who sounds more like Ozzy than Ozzy does himself these days.

The Sixth Storm is traditional doom metal through and through, with doomed riffs, doomed atmosphere, and doomed lyrics. The pace is sometimes slow, sometimes groovy, but always gloomy and… doomy. I don’t know about you but metal first ‘spoke’ to me through riffs like the opening ones of “Blood Pope” or “The Nephilims”, and I am still a sucker for this stuff. If you are also up for that, you will find satisfaction here.

Other things to praise about this album? First of all, the production which is dirty and rough, and has this street-bred, rock n’ roll character that fits the music like a glove. Then, there are also the little details, like Dan Fondelius saying ‘Guitar speak’ before the solos of “Blood Pope” and “The Giver And The Taker” or ‘Go!’ before the most upbeat riff of the album on the song “Oden” starts playing. The use of keyboards is another aspect that is on point and enhances the experience of songs in different ways; they give an eerie feel on “The Ending”, a pagan one on “Baltic Storm”, and they are nothing less than heavenly on “Heaven’s Door”. Finally, the lyrics must be mentioned; they are simple but also sarcastic, caustic, and even emotional at times. As Mr Fondelius has said in the past, “lyrics should say something, otherwise you might as well just do instrumental music”. The closing piano ballad is beautiful on every level, lyrics included.

On the downside, I cannot oversee the lack of variation and the presence of repetition in some songs. I can accept this approach on “The Curse” because I would gladly listen to its main riff on repeat until the end of my days but I find that same approach to be tiresome on tracks like “The Ending” or “The Giver And The Taker”. The album is very long (the longest in the band’s discography) and I don’t think it needed to be; some editing would have done wonders to the overall appeal and effect. That said, I would not necessarily omit any song, I would just prefer most of them to have been shorter is all.

I am happy that we have another Count Raven release in our hands; the band has had two albums in the last two decades, so this calls for a (doom) celebration anyway. Look at the arch on the cover art. Look at the band logo. What do you expect to find in there other than pure, unadulterated doom?

“Will I see you again?
I am not so sure my friend”