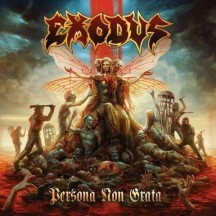 
Welcome back, it's been too long.

They say good things come to those who wait ,and it would appear that Bay Area thrash legends Exodus are proponents of this creed, giving fans a far too long seven-year wait since 2014’s Blood In, Blood Out to release its follow-up Persona Non Grata, during which time the band have been a prolific touring machine, Tom Hunting has battled cancer and main man Gary Holt’s stint in Slayer has come and gone with that band's retirement (leaving an Exodus-shaped hole in any future Big 4 shows).

Good things have indeed come to pass for fans of Exodus, as Persona Non Grata is a solid latter-day thrash album that doesn’t rest on the band's laurels or legacy, and breaks heads instead of new ground. Firing on all cylinders, the band roar through 12 tracks of the thrash style the band have long been creators of, with ferocious and unrelenting pummelling of the senses abounds.

One thing that fans of the band will notice when looking at this album is that only three songs break the six-minute mark, a marked change from the band’s recent output, though one that combines the best of both worlds, with tracks that are brimming and nearly bloating with sheer material before letting the sledgehammer swing and taking your head clean off your shoulders. With the likes of “Antiseed” and “Lunatic-Liar-Lord” featuring large, but not excessive, amounts of content, the band also throw out (by their standards anyway) short sharp shocks in “The Beatings Will Continue (Until Morale Improves)” that give the album a level of variation that hooks you in.

Where the band hit their stride is when they create a middle ground between these two styles, with tracks like “R.E.M.F” and “The Fires Of Division” having both atmosphere and the energy of a short track just bursting at its seams. From the frantic guitar work of Holt and Altus to the cavalcading Hunting drums, the band know exactly what to do and deliver with style, while Zetro delivers his trademark style along tracks like “Slipping Into Madness”, which sees Zetro take on a vocal delivery that borrows heavily from the band’s yesteryears with Rob Dukes and gives fans the best of both worlds, Zetro handling it with aplomb.

With the band self-producing the album and mastering it alongside Andy Sneap, you would think they were guaranteed the best sound, but this is not exactly the case. While the production is highly enjoyable, it does lack that bite and sharpness that attacks the listener, laying out the music in front of you rather than throwing it directly at you and taking you off your feet. It is only a minor concern in the grand scheme of things, but something that is noticeable on tracks like “Clickbait”.

Those of you who (somehow) are not fans of the band or its sound will unlikely find much here to enjoy as the band stick to their guns, and if anything, increase the firepower at their disposal. Zetro maintains his divisive vocal style while the band get down to business as usual and assault listeners rather than try to endear themselves to a new audience; Persona Non Grata is an Exodus album through and through.

Its been a (too) long time coming but thankfully it is here; Persona Non Grata will likely slide into regular rotation for thrash fans who have been waiting for a new Exodus album. Throw up the horns and crank up the volume dial, you won’t regret it until you see the damage you have caused jumping around the room thanks to this solid album.

Written on 18.11.2021 by
omne metallum
Just because I don't care doesn't mean I'm not listening.
More reviews by omne metallum ››