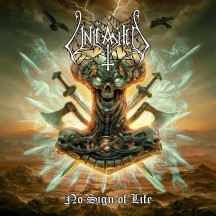 
Not on life support yet.

Swedish death metal stalwarts Unleashed return with a bang and prove the album title No Sign Of Life a misnomer, with a record steeped in life via some high quality death... metal. Fourteen albums and still going strong, Unleashed are carrying the old school death metal banner in confident style and show no signs of slowing down or fatigue whilst treading the path they have stomped along for over thirty years and counting.

Given the band have produced fourteen albums in thirty years, No Sign Of Life sounds surprisingly vibrant and full of purpose, when many bands have long lived off of past glories at this stage of their careers. “The Highest Ideal” is the sound of a band moving forward with the enthusiasm of a band many years Unleashed’s junior, and tracks like “Tyr Wields The Sword” are imbued with more quality than these younger bands.

With “The Shepherd Has Lost His Flock”, the band have not lost sight of what they do best and produce yet another 'up-tempo with an underlying groove' track, which has become their forte. While repeating this formula throughout an album can get boring quick, the band ensure through quality that this is not a hindrance but the right course to take. “Did You Struggle With God?”, “No Sign Of Life” and “Where Can You Flee” are strong and vibrant tracks that sit amongst a collection of other enjoyable and powerful songs that make the album as a whole something to hear in short order.

Though the band have long painted their colours to the mast in terms of sticking to the death metal formula, they do tinker at the fringes of their formula through the album, albeit in small doses. The opening and chorus to “Midgard Warriors For Life” and the off-kilter rhythm to “It Is Finished” are minor variations that, though small, help give an identity and breath of fresh air to a formula that easily becomes stale if followed too closely.

The production is a mixed bag for much of the album; while the hallmarks are still audible and placed well in the mix, from Schultz’s frenetic drums to Hedlund’s rumbling bass, there is so much empty space left in the sound that the band’s sonic attack is not as immediate and all-consuming as it could have been, which for death metal is a huge missed opportunity. It is a shame, as tracks such as the title track could be improved with such tweaks and make casual listening not an option, given how easily these tracks otherwise grab your attention.

It is a mystery how Unleashed are not a bigger band than they currently are; as one of the more consistent, prolific and enduring bands in metal, their status belies the quality of the output they produce. No Sign Of Life is another solid entry into a discography that is underrated and one that shows the band are still firing on all cylinders to the benefit of those who listen to them.

Written on 20.11.2021 by
omne metallum
Just because I don't care doesn't mean I'm not listening.
More reviews by omne metallum ››