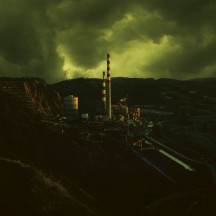 I've said it before that there are basically two distinct genres called post-metal. With some overlap. There's metal that became post, as in usually sludge metal that got so atmospheric that it became post-metal. And then there's post that became metal, as in third-wave post-rock bands that were heavy enough to be called metal. The line isn't always clear and you'll find bits of one in the other, but generally bands in the second category have a harder time being called metal, since they're basically heavy post-rock. And they're usually instrumental too. Toundra fall in this category. And since 2008 they've delivered the goods in this niche, naming each album as an incremental number, up until 2018 saw then finally putting an actual album title on Vortex. Then 2020 saw the release of Das Cabinet Des Dr. Caligari, a reupdated soundtrack released on the hundredth anniversary of the German Expressionist film. And now, they bring Hex.

If you're already familiar with the style, you already know what to expect from it, and if you're already familiar with Toundra you know that they're good at it. What sets Hex apart from its predecessors is the pandemic context in which it was conceived. Which is something that you've probably heard about a lot of albums, but that's what usually happens during global events. But more importantly, what sits at the heart of Hex is humanity's impulses for hate. So I guess it makes sense why there's a bunch of relatively heavy riffing for a post-rock album when the album is themed in so much negativity, and anyone familiar with post-rock knows how important it is for the music to capture emotions. And that Hex does, complete with the frustration and resentment of it all... but not all of it is that negative. There's some triumph there too.

The album is also structured pretty distinctly, starting out with a 22 minute song called "El Odio" (split up in three tracks for some goddamn reason), while the rest of the album is pretty straight-forward. I have a soft spot for albums beginning with their longest song, because I acknowledge how hard it is to keep the momentum once that song is over. Not really the case here, since Toundra's sense of ebb-and-flow was carefully developed over their career, with the production leaving space for each instrument to make an impact in the mix, from the marvelous guitar playing, punchy bass, swirling synths, and the crisp drumming. And I'm pretty sure there was a saxophone or two too. Simply put, no surprises, just truly competent musicianship.

Written on 17.01.2022 by
RaduP
Doesn't matter that much to me if you agree with me, as long as you checked the album out.
More reviews by RaduP ››