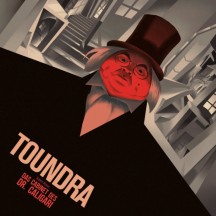 
How often is there a hundredth anniversary for a groundbreaking movie? How often do you have post-rock bands recording a new score for it?

Toundra are a Spanish instrumental post-rock band that have been around for more than a decade and only recently started naming their albums as something else than a number. While Vortex could've just as easily been Toundra (V), what we have here acts like more than just an album. Like the title suggests, it is based on the 1920 German expressionist film Das Cabinet des Dr Caligari. In fact, not only based on, if you look at the tracklist, the track numbers and times fits perfectly with the movie's acts. Indeed, this is a companion piece for the movie.

But the theme and release date is no coincidence. Das Cabinet des Dr Caligari was released on the 26th of February 1920, exactly a hundred years ago. It's almost impossible for words to describe how groundbreaking of a movie it was, and how it is still entertaining to watch even a full century later. But it being a silent movie, the lack of dialogue and the audio technology of the time meant that it had to rely entirely on an orchestral soundtrack, a part which I often find least memorable about films of that era anyway. And other than dark ambient, what other genre would be most fit to act as a soundtrack to the world's first non-linear horror movie?

I have to admit that something like dark ambient or drone or darkwave would've been my picks as well, but post-rock is still way ahead of boom bap or bubblegum pop. Das Cabinet des Dr Caligari can be judged both as a standalone album and as to how well it scores the movie. Having done listens on its own and in sync with the movie, the latter is very much preferred (as was intended) as the music is a lot slower, more atmospheric and less entertaining than it would've been if it didn't need to accommodate the length, mood and pace of the movie. You may remember similar issues with an opera I previously reviewed, but in this case the movie was already there and the music has to completely be subservient to it.

As a soundtrack, there are clearly attempts to match the mood of the film. It's gleeful when the movie is gleeful, it's somber when the movie is somber, it's melodramatic when the movie is melodramatic. Listening to the album wouldn't really make anyone think of the movie in any way, but they strangely do complement one another and the link between them works when put together. As weird as it is to have such well produced music along with a grainy century old film, both do have some of that expressionistic quality.

You can watch the film with the album as score below, but unless you understand either the German film or the Spanish subtitles, you might need to also find a version with English captions.

Written on 26.02.2020 by
RaduP
Doesn't matter that much to me if you agree with me, as long as you checked the album out.
More reviews by RaduP ››