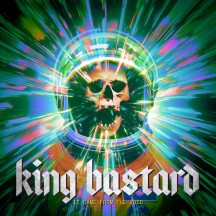 
Stoner/doom metal bands love the void; if they’re not going into the void or wondering where you were whilst they were into the void, they’re focusing on things coming from the void.

‘The void’ comes up quite a big in this sphere of music; so does the presence of ‘king’ in the band name. Joining King Buffalo, King Witch and King Weed are King Bastard, who have just released their debut full-length, It Came From The Void. With packaging as standard as this, and it coming in a genre as plagued with derivative copycats as stoner doom, the omens for this being a worthwhile record are arguably not great on first glance; however, there’s more to King Bastard than just a disposable rehash of Electric Wizard and their ilk.

“From Hell To Horizon” starts off typically enough, with some ominous samples leading into slow, fuzzy riffs and classic guitar leads; however, although the beginning and the end of the song are doomy, the mid-section is more of a mellow psychedelic jam, sounding like it would fit nicely into a Samsara Blues Experiment song. Beyond this track, King Bastard expand their horizons to bring some unexpected elements into tracks. “Kepler-452b”, primarily built upon contrast between earthshaking low-end doomy rumbles and bluesier jams, is capped off by a nice little saxophone solo; while saxophone’s place in metal seems to get debated every time it turns up, on It Came From The Void, it only appears in a cameo, and it’s one that works well.

Arguably more unexpected is the aggression featured in “Psychosis (In A Vacuum)”, as a conventional plodding stoner doom intro is taken over by first High On Fire-esque driving metal and then a burst of outright extremity, with blast beats, rapid riffing and harsh vocals (the only vocals that actually appear on the record). This track, whilst only venturing briefly into such intense territory, is the nastiest on the album; beyond this point, it transitions into a noisy, psychedelic strain of stoner doom reminiscent of the works of Ufomammut, developing a cacophony of disorienting sound layers on top of a dense bass foundation.

King Bastard can be melodic, fuzzy and groovy, but they’re not afraid of plunging into less pleasant sounds when necessary, such as when painful screeches infect the closing moments of “Black Hole Viscera”. At the same time, they appreciate the charms of lighter tones; “Bury The Survivors/Ashes To Ashes” features gentle acoustic strumming and dainty guitar solos in the vein of Weedpecker’s more spaced-out material. Pretty much the whole album flows between Weedpecker mellowness, Black Sabbath blues, Ufomammut density and other landmarks across the stoner/doom landscape. The closing song is in line with this, showing an uncanny resemblance to Windhand in its first half before rounding out the record with noise.

In some ways, I guess this review highlights that King Bastard primarily avoid sounding like a generic rehash of a single niche within this subgenre by instead recapitulating the work of a range of bands across the genre, and that might be fair, but by doing so they do highlight the diversity that can be found within stoner doom. They do also bring some unexpected elements along as well with the saxophone and the flirtations with extreme metal, and when they bring it all together, everything lands well and sounds fresh enough to enjoy on its own merits. They’re not revolutionizing the non-musical aspects of stoner metal, but King Bastard have the ideas and chops to stand out in a saturated scene.

Written on 20.01.2022 by
musclassia
Hey chief let's talk why not
More reviews by musclassia ››