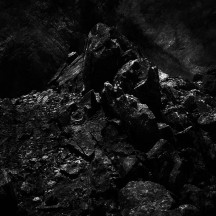 
There was a time when Deathspell Omega played impenetrably technical black metal. Metal bespeaking the relationship between Man and the Devil; dissonant and avant-garde. The times they are a-changin'.

After their great trilogy of albums ending with Paracletus, they lost some of their allure, turning into something neither very memorable nor impressive, and their fans started worrying. “Worry not”, said the band, “for we have devised a new style which burns both more inspired and accessible. The Long Defeat is an album to which one could almost dance. Having succumbed to the gnawing influences of borderline-normal rock, folk, and post-rock, they have yet again reinvented themselves, and it’s a very promising development, although not without its faults."

A lone silhouette is lumbering through the forest, watched by owls that are not what they seem. The most wise and cynical of the owls murmurs “You have sold out, Deathspell Omega. You brought in Mortuus from Marduk and Mikołaj Żentara from Mgła to offset the controversy of having a guy like Mikko Aspa in the band. I can even make out the words they are singing. There are even guitar solos! What gives?”

“It is not a sellout,” says next a blood-drenched poodle, pissing on a pile of bones and gore. “It is just a band that constantly reimagines themselves reinventing their sound once more.”

"And writes yet another obtuse, long-ass, technofuturodystopian-something fable to base the album's story on," says the cynical silhouette, doing something obscure and dreary in the shadows. "Something about the Machine taking on a life on its own, and usurping its creators."

"The Devil," interrupts a pest-ridden fox.

"What now?" say the owls in tandem. "What are you on about?"

"The Devil," repeats the fox, gazing into the distance, wearing sunglasses after dark.

"Very well," says the silhouette. "The Devil too. Who would have known?"

"'Enantiodromia'?" asks a crow, casually shitting on the ground from a tree branch.

"I think it is Greek for 'Crossroads'," says the wise owl. "It is a quite mellow, mid-paced, atmospheric piece of music. There's barely any of the dissonance the band used to be known for. Tribal drumwork, and a magnificent bass tone, yes, but as a whole rather underwhelming. The chorus…"

"There is a chorus?" asks the poodle, now licking at the bones it previously pissed on, seemingly enjoying it.

"Well, sort of," says the wise owl. "It is all quite memorable, really, but anybody expecting something like FAS or even Paracletus will find little of that sound here. It ends in a very moody section with darkwave synthesisers, and leads into the second track, which is also the best."

"If I may," wheezes the shady silhouette, "there is a very beautiful, folky melody driving 'Eadem, Sed Alter', with blast beats and a rambling, screaming voice. It's really quite close to any ordinary posthblack metal you might have already heard, but I have to admit it is done well."

"The title is Latin for 'Same, But Different'," interjects the high-browed owl. "The title track next is very doomy, sort of slow-paced, and after it, even more surprises await."

"They have a god-damn gang shout chorus on 'Sie Sind Gerichtet!', straight four-time beats, and the final track has almost a hard rock drive to it." The crow takes another casual shit on the ground.

"Don't forget the clean vocals in the chorus," says the fox nonchalantly.

"I think," says the wise owl, "that we can all agree we did not see this coming from Deathspell Omega. But then, the same could be said for many of their albums. If you were a fan of tracks like 'Third Prayer', 'Apokatastasis Pantôn', or the Drought EP, you will enjoy this a lot."

"I concur," say the rest of the funny little animals in tandem, and proceed to go about their obscure business.

This review was based on the The Long Defeat fable, which you can read on the band's Bandcamp page.