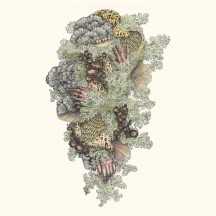 So here we have Pyrithe's Monuments To Impermanence, an album with the best use of trash as percussion since St. Anger, since a lot of the guests credited here are credited as performing "found percussion", which is the percussion equivalent of "found footage" I guess. I know it sounds like a bit too much of a gimmick, but bear with me. Let's start from the beginning. Pyrithe is a Pittsburgh trio and this is a debut studio album. I bet you expected me to say "debut full-length" instead, but they actually debuted with a live album a while back when they were a quartet. This one was released through Gilead Media, and the outlook here is described as "the band sees the world as apocalyptic and dreadful but through a lens of hilarity and absurdity". Keep that in mind.

At its core, Monuments To Impermanence is a sludge album, at least that's the prevailing genre. Of course, there's much more to it, but it's a bit tougher to put into words than just sludge blended with prog and noise rock and post-metal and whatnot. You can trace some parallels to Amenra or Pyrrhon all you want, but the approach here tries to push boundaries beyond the mere blending of genres. Even the approaches here, though a lot of them are not completely new, can't as easily be traced back to a specific influence. I've mentioned Pyrrhon not only because of their vocalist making a guest vocal appearance on this album, and both band names start with "Pyr", but also because that's still a pretty good reference point in that Pyrithe twists sludge like Pyrrhon twists tech death.

One of the most surprising aspects of Monuments To Impermanence was that, despite having a lot going on songwriting-wise, it's never overbearing. The band clearly didn't aim to make an album that suffocates or overwhelms the listener, and as each section moves into its harsher and savage moments, it relies more on very intense bursts of percussion and intricate songwriting rather than thick layers of distortion. The percussion is one of the most unique you'd hear in a metal song, and I'm sure it's not just due to the aforementioned guest performances, but all of it feels both very intricate and creative in its use while also feeling like it takes up more space that you'd expect. The same happens with the bass, which is doubled by a contrabass. So it's a marvel that despite clearly having a thicker instrumental palette that is taking more space, the sound isn't cluttered with it.

A lot of that comes down to the amazing production and mixing, but also to the songwriting that moves from pensive Cult Of Luna-like atmo sludge to harsher vicious ones. There's more to how these are arranged than merely alternating harsh and mellow to contrast each other, but each is given strength to stand on its own feet while also reinforcing each other. The flow helps create tension continuously, even in some moments that might feel a bit meandering, though I never have to worry about said tension not being released. From the pummeling guest vocal performance of ex-vocalist VC in "Glioblastoma" to the stop-start moments of "Luminous" to all the grooves and progressions in the lengthy closing track, all of these stuck with me even after the album was done.

I took a bit longer with this review, because some listens didn't allow me to write anything more than "Holy shit!", because this is the kind of album that has depth and expands fully in a lot of directions. This is the kind of album that isn't easily replaceable with any of the other sludge albums you hear every other Friday, as great as a lot of those are. Pyrithe are Pyrithe, and you could never mistake them for anything else henceforth.

Written on 10.05.2022 by
RaduP
Doesn't matter that much to me if you agree with me, as long as you checked the album out.
More reviews by RaduP ››