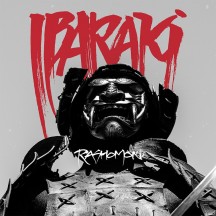 According to reports, Trivium frontman Matt Heafy has been working on a black metal-oriented project (initially named Mrityu) with Ihsahn for over a decade, although it only began to fully materialize starting from 2019. Trivium are by now a mainstay of the post-millennial metal mainstream, so attempting a black metal album would be a pretty major departure, but, particularly on recent records with the arrival of Alex Bent, there’s been snippets of more intense material that suggested it wouldn’t be beyond the comprehensible, and Heafy’s sported enough black metal tees in him time to indicate a passion for the style. Therefore, particularly as a fan of Trivium, I was fairly intrigued by what Ibaraki would have to offer.

Now, if you’re reading this, haven’t heard Rashomon so far and are also intrigued by this prospect, it’s only fair that I say this right now: this isn’t a black metal album. It’s an album with segments that are black metal, and further portions that are black metal-inspired, but on the whole it’s not by any means the prevailing style. Nuclear Blast were fairly clever with their release strategy for Rashomon, as the songs with the most features that could be classified as black metal were released as the advance singles. Lead single “Tamashii No Houkai” is bookended by some fairly ferocious blasting and blackened tremolo capped off with symphonic bursts, while “Akumu” (featuring Behemoth’s Nergal) goes a bit further with the frozen blackened chords that give a more classic 90s sound in the sections they feature. Additionally, on “Rōnin”, My Chemical Romance’s Gerard Way unleashes some surprisingly intense shrieks during bursts of aggressive blackened metal. Still, these portions, which comprise the minority of the runtime of the tracks in which they feature, make up the majority of the black metal on the album; outside of them, black metal influences can be at best heard infrequently in brief flickers of tremolo or blasting.

The second part of that introduction that a few have considered arguing against is this being a solo project, as, aside from these aforementioned guests, this album is performed with the assistance of all of Heafy’s Trivium bandmates as session musicians. However, I would argue vehemently against anyone claiming this to be just a Trivium album in fancy packaging. Although the music is performed by all of that band’s members, it’s only written by one of them, so it makes more sense to frame it as that member’s separate passion project. Additionally, while it’s pretty easy to tell that a major songwriter from Trivium has written this album, it doesn’t sound like a Trivium album; even overlooking the fact that the ‘not much’ black metal here is still more than the ‘no’ black metal on their albums, Rashomon is a far proggier album than anything Trivium has released, including the similarly Japanese-themed Shogun; really, it would be more accurate to portray Ibaraki as Matt Heafy’s (extreme-tinged) progressive metal solo project.

As it turns out, Heafy’s actually pretty good at writing proggy material. Overlooking the slightly peculiar circus music tracks bookending the record, whose relevance to the rest of the album isn’t entirely clear to me, there’s some pretty tasty music to get stuck into on Rashomon. “Kagutsuchi”, the most Trivium in nature of all the tracks here, sees the first instance of Heafy incorporating Japanese traditional instruments into songs on the album, and they fit in quite smoothly during the hard-hitting menacing first half of this song, which features a fairly typical chorus in what is a relative rarity for Rashomon, before the second half turns into a proggy instrumental. This section does feature some keyboards, which are probably one of the most surprisingly strong components of the record; on top of the rudimentary but effective faux-symphonic blasts in the blackened sections, they add a brashness to parts of certain songs that is surprisingly unexpected. In one part late in “Jigoku Dayū”, I even found myself thinking of Persefone.

Across Rashomon, there’s quite a healthy range of sounds, even if the variety is more noticeable within songs than between tracks. The fluctuation between Trivium-style chunky grooves, proggy soloing, acoustic detours, atmospheric stretches and extreme metal flirtations makes tracks such as “Ibaraki-Dōji”, “Jigoku Dayū” and “Komorebi” compelling, but there’s not necessarily huge jumps between tracks, although that is helped in part by placing the blackened double-header of “Tamashii No Houkai” and “Akumu” back-to-back. The most intriguing material for me, however, is located towards the end. “Rōnin” is the longest song on the album, and uses that length to explore softer sounds perhaps more so than any other track, despite the blackened interjections by Way, while the Ihsahn-featuring “Susanoo No Mikoto” takes some of the vibes from those aforementioned bookend track and incorporates them in a far more effective manner during a creepy and ominous midsection before Ihsahn, who is said to have influenced the composition of the album as a whole, gets the chance to really emphasize his presence with some fiendish shrieks.

On the whole, I think Rashomon is a rather solid record; it doesn’t live up to the ‘Matt Heafy does black metal’ hype, but I think it’s more interesting than a more black metal album from him would be. On the lesser side, given the extent of the Japan theming surrounding the album, that side of the record could have been explored a bit more, as it only really comes through musically in fits and starts. In terms of real weaknesses to the album, I think the element that has the most capacity to divide are Heafy’s vocals. I’ve seen a few complaints on this site alone about his cleans, and while I’m personally a fan of how his singing voice has matured, I can understand those that would be perturbed by the dramatic emphasized tone of his performance on the album, particularly on the songs that perhaps veer away from his strengths, such as “Komorebi”, which features the odd note that spills over into maudlin. Perhaps more likely to find detractors are Heafy’s harsher vocals; whether due to the mixing or his performance, there’s an awkwardness to them in parts that I didn’t really pick up on in last year’s Trivium record, In The Court Of The Dragon.

I didn’t expect to go on for so long about this album, but I am quite keen on Matt Heafy, so perhaps it was inevitable. Overall, though, once one looks past the somewhat wayward hype about the style Rashomon was portrayed to have during its pre-release promotion, I think this is a pretty solid record on the whole. There’s a few minor rough patches or slightly odd decisions (such as the video game sound effects during “Tamashii No Houkai”), but I overall really enjoyed seeing Heafy more fully explore those progressive influences that occasionally sneak into Trivium tracks, and I'd be very happy to hear more from Ibaraki in the future.

Written on 12.05.2022 by
musclassia
Hey chief let's talk why not
More reviews by musclassia ››