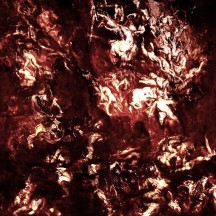 Regardless of whether or not one regards their "Roman Catholic black metal" approach as gimmicky or pretentious, and disregarding the question of whether or not a BM band with Christian themes is "real" black metal, there's no denying that Reverorum Ib Malacht have been quite prolific since shifting gears to profess their love for Mr. Yeheshua. The last album of theirs I crossed paths with was that 2020 one with the obnoxiously long, non - English title. It was a decent release that dropped a lot of interesting ideas, but that somewhat overstayed its welcome, and begged for further refinement. Have these good friends of Christ tightened up since?

To come right to the point, Hell yes they have. The 2020 album I mentioned was notable for seeing Reverorum Ib Malacht going in a considerably more industrial direction with their sound. Svag I Doden continues this new venture for the band, but here it feels a lot more controlled and evenly distributed throughout the rest of the black metal sound that dominates. It's not trying to overtake the BM as much as it gives it an important embellishment. The mechanical drumming, odd, glitchy electronic sounds, and especially the audio sampling all combine to give the music here a colder, more otherwordly edge that serves to make it even spookier than Reverorum Ib Malacht already were.

Their 2020 album ultimately suffered from having too many different compositional techniques spread out over too wide a range. In short, things weren't given their proper breathing room. On Svag I Doden, however, Reverorum Ib Malacht appear to have learned a valuable lesson. Minus the third, interlude - like track, all the others are 9 minutes or longer, and incorporate quite the impressive array of songwriting techniques. RIB get quite blasty and relentless at times here, but they also prove themselves equally capable of pulling back and going into a more hypnotizing, midtempo territory, as on the fantastic penultimate track. And all throughout, a wonderful, spacious sense of production helps to bring it all together: the static - like assault of the guitars, the phenomenal drumming, low rumble of the bass, and the deep, almost Urfaust - like vocal chants.

Svag I Doden wins out not merely because Reverorum Ib Malacht decided to trim off a lot of their fat (about 45 minutes of runtime is ideal for these guys, IMO), but particularly because they lost next to nothing in the process of doing so. Indeed, if anything it's only made their sound tighter and even more intimidating than it already was. The incorporation of the industrial elements has made the music a lot more original, but thankfully they don't overpower the haunting Catholic atmosphere or strange Latin samples that won the band their distinction in the first place. If Svag I Doden is any hint as to the future of the Reverorum Ib Malacht sound, mark me as a satisfied rider aboard that train.

Written on 15.07.2022 by
Apothecary
Comforting the disturbed and disturbing the comfortable since 2013.
More reviews by Apothecary ››