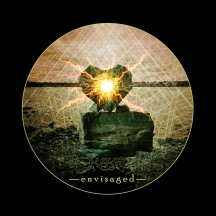 
Kekal have been around for quite a while, so why am I hearing of them first now? On the surface, Envisaged sounds like sort of a punkier take on post-80s King Crimson, and that’s a pretty heavy compliment... on the surface.

Now, I don’t know how much of Kekal’s music is directly inspired by King Crimson as opposed to just inspired by the same Indonesian gamelan folk music that inspired Larks’ Tongues In Aspic, Discipline, and most of King Crimson’s later work, and I don’t really know if it matters. Well, “punkier” is a matter of interpretation, I guess, but in one way or another, a lot of Kekal’s music comes across as being tinged by a punk attitude. I can’t precisely say why, but there’s a general sense of rebellious irreverence combined with a comparably grounded approach to avant-garde esoterica noticeable in all but the sum of Envisaged’s individual parts. Already on the second track, “Born Anew”, Kekal throw in sections of black metal as well as dub trance, and the whole thing quickly devolves into “undefinable” territory. So, let’s try to decipher it, shall we?

Having had their one permanent member relocate to Canada, and the rest of the line-up credited only as anonymous voluntary contributors, composing this album must have been sort of a piecemeal affair. This gives Envisaged a quite jarring vibe throughout, alternatingly for better or worse. On “The Alchemy Of Creation”, industrial ambiance comes front-centre, with creepy outer-space synth melodies juxtaposed on top heavily reverberated, yet sparse, drumming. The track beautifully evolves into a sort of Cosmos-soundtrack like piece, making it evident that the progressive metal is no larger a part of Kekal’s toolbox than these elements of ambient and industrial electronica they employ. It also makes evident that Envisaged’s wave function comprises a linear combination of perhaps a few too many superposed eigenstates to avoid quantum decoherence upon closer inspection.

Yes, this use of quantum physics terminology still makes a lot more sense than the lyrics on display here. You’ll either hate or love the lyrics, I suppose, assuming you’re part of the subset of listeners who’d even care to begin with. However... Written by somebody who looks like they wholeheartedly believe in pseudoscientific shit like quantum healing, the concept, as far as I’ve gathered, is a celebration of the world entering a higher octave of vibrational frequency (whatever that means…)? It’s all fair game, I suppose, but even though I like to consider myself a quite open-minded student of physics, and there are passing references to the Jungian view of the collective unconscious (psychologist Carl Jung in fact teamed up with quantum physicist Wolfgang Pauli on a paper attempting to use quantum mechanics to explain synchronicity, establishing a framework for the science of consciousness) it gets bad real quick when the lyrical content is this borderline cringe-worthy all the way throughout. Quantum mechanics is already a misunderstood enough topic without this sort of misappropriating its ideas and terminology for the sake of admittedly badass-sounding titles, and I sure hope nobody will be trying to make science out of this shit anytime soon. The relations and potential analogies between music theory and quantum mechanics are by all means worth exploring, and discussing; if that sort of thing sounds interesting, you may find me in the rafters, smiling gleefully while overlooking a crowd of string theorists suffering further setbacks for each piece of experimental evidence coming out of today’s particle accelerators.

There’s something about Envisaged that does make these quantum allegories make some sense, though, and it’s in the fact that much like a system in quantum coherence, very little can be said about the album as a whole, and quite a lot is lost in the inevitable transition from discussing the sum as opposed to focusing on its individual parts. I could listen to any one of its nine tracks and extrapolate a different picture of the album in its entirety from each one (the overall best picture would be sourced from "The Ascending Collective", which is the most coherent piece here). Most great art can be described as “more than the sum of its parts” (and that’s just the beginning of what could potentially be understood by way of emergentism), and in that sense, Envisaged falls just short. Much like the would-be protagonist of Envisaged, a wave function of the entire Universe would be a piecewise continuous differential equation, much like the flow of Envisaged is piecewise coherent, yet a bit too discontinuous in between tracks to ever fully form a clear, full picture. Your enjoyment will likely depend on your expectations, but this album sounds more like three EPs jumbled together than an LP to me, and, much like its dubious lyrical content and every analogy I've made in this review, falls just short of coming across as particularly thought-through.