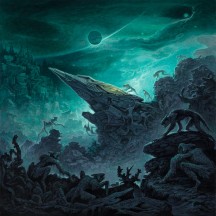 
Much like Jesus, one of the leading names in the Christian metal scene has returned from the dead; however, it’s taken a lot longer than 3 days.

Becoming The Archetype were quite a major discovery for me early on my metal journey, as the presence of three of their albums in my 2011 ‘top 100 albums’ list can attest to, but it’s not a name I encountered much discussion of since (online or in the real world), which is why I found some of the formative sentiments voiced in Angry Metal Guy’s review of their new record, Children Of The Great Extinction, quite validating. [Side note: What I also found amusing were the various commenters claiming that the subject matter of Christian metal stops them getting into the music; I’m not Christian, but when the vocals are growled, it’s hardly like the message is slapping you in the face.] The band’s early streak of records was, and still is in my eyes, a very solid run of records exploring the space between prog, death metal, metalcore and deathcore, with plenty of quality riffs to get stuck into, and I would bat for them in a debate any day of the week.

However, setting an early example that several other beloved bands of mine would subsequently follow, no sooner had I become a fan than they began to disappoint, first with the scattered and underwhelming Celestial Completion, and then the mediocre djentcore of I Am, at which point formative vocalist Jason Wisdom and drummer Brent Duckett had already departed, with guitarist Seth Hecox trying to keep the project alive. The band disappeared shortly after the release of I Am; I had assumed this was due to them disbanding, but it appears it was but a lengthy hiatus, as nearly a decade on, Wisdom, Duckett and Hecox have reformed, with Children Of The Great Extinction the fruit of the trio’s labours.

The immediate good news is that the band haven’t picked up where they left off; I Am can be consigned to history as an unfortunate misstep, even if this album follows its lead in beginning every song title with “The”. The album isn’t really an obvious reprise of any of their pre-hiatus records in particular, although there are certainly riffs and passages that bear a familiar resemblance to moments on Dichotomy and The Physics Of Fire. The latter, which is my favourite record from the band, had a persistent bleakness throughout; in contrast, there is a hint of brightness to the laser-speed riffing, shiny keyboard blasts and clean singing (a more common feature on this record than most of their others) on opening song “The Dead World”. Subsequent tracks such as “The Remnant” continue in this vein, as guitar riffs at key moments are doubled up by the keyboards, while the robotic sci-fi sheen to the sung chorus of “The Hollow” reminds me a bit of some of the more Devin-inspired parts written by The Faceless.

At the same time, as mentioned, there is a lot hear that calls back to classic BTA, whether it’s guitar harmonies near the end of “The Dead World”, the contorted prog-deathy riffing in “The Calling”, or the dirty groove in the closing seconds of “The Awakening”. This is a band that can throw out some sick riffs and develop subtle atmospheres, and the added familiarity of Wisdom’s vocals on top of them feed into a warm sense of nostalgia. The greatest sense of nostalgia, however, comes with “The Sacrament”, which, between the keyboards, the call-and-response chorus, and proggy bridge, sounds like it could have seamlessly slotted into Dichotomy’s tracklist.

On the whole, I feel like this a pretty solid return by Becoming The Archetype; when it’s on form, particularly with the songs highlighted in the previous paragraph, as well as the gnarly “The Curse”, they pack a real punch. Still, while this reunion is successful, I don’t think it’s exceptional. First, I’m not particularly convinced by the clean vocals; singing would appear on The Physics Of Fire and Dichotomy, but sparingly, and would make a great impact when it did (“Epoch Of War” remains a glowing example of this). In contrast, there’s a lot more of it here, but it’s not overly impressive, and with its persistent presence, these sections don’t have novelty to fall back on as a enticing feature. Beyond the vocals, there’s just a certain grandeur to this band’s finest work, a certain je ne sais quoi, that I’m not quite getting from Children Of The Great Extinction; while I enjoy the record plenty while it’s on, I’m not feeling compelled to return to it.

Still, when coming back from such a prolonged separation as a writing unit, that’s a decent level to reach on the first outing. With time, I can still envisage them recapturing that 2000s magic, and if they do, this will have served as a solid springboard.

Written on 02.09.2022 by
musclassia
Hey chief let's talk why not
More reviews by musclassia ››