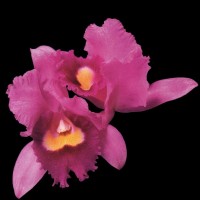 
Opeth's debut album Orchid released in 1995 is a keeper. It isn't mentioned much by Opeth fans but it is certainly a lost treasure. New fans will stray from the album as more reviewers simply write the album off as being 'brutal' and 'sloppy' or 'solid death metal' as what I have read. The thing is that Orchid is just as diverse as Blackwater Park or their latest release, Ghost Reveries. Presented in Orchid is what will become of Opeth on a grand scale: brutal, melodic, acoustic, alternative, emotional and heartfelt by placing melodic death metal alongside acoustic and clean electric guitar rock.

An equal range of guttural and clean vocals is still in full form on Orchid. They are more raspy and poorly produced, many of the lyrics unlistenable at times. They come across as loud roars and screams. Many reviews I've read have said that there are only death metal vocals on the album; apparently, they didn't listen to the album at all or at least didn't listen the whole way through. However, guttural death metal vocals do show up more then the clean and there is an imbalance on Orchid; that would mean that sizing the vocal diversity on this album up with a later release would be unjust. Orchid oddly contains more acoustic guitar trinkets then some later albums, played by themselves with no instrumental accompaniment.

Although Orchid is nothing like the band's further evolution into stunning masterpieces like My Arms, Your Hearse, Blackwater Park or the brilliantly dark acoustic Damnation, Orchid still needs to be mentioned in any topic of Opeth because their musical diversity can be traced back to this album. If Opeth put out a debut album which was just death metal, then Orchid could be written off as an album where they didn't know what they were doing and hadn't stretched out their musical wings. The thing is that Mikael Åkerfeldt and his gang knew exactly what they were doing right from the beginning and it really shows on their debut album Orchid.