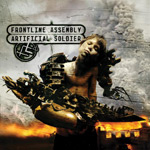 It seems that out of all of the EBM and electro-industrial groups out there, Frontline Assembly traditionally gets the most flak for the shortcomings of the whole scene. This might simply be because of their success, although I suspect that their often overbearing insistence on indulging in genre clichés might have had something to do with the accusations as well. Well, it is now 2006 and it seems that all has been said and done in this admittedly not particularly ambitious to begin with genre. How does FLA fare in these difficult times? Lets take a look at Artificial Soldier for the answer.

So first the good news - yes, there are some new elements here. Actually, FLA have always adapted to the times and modernized their sound whenever possible; however, it seems to me that they went the extra mile for this particular release. Rumor has it that some cutting-edge production techniques were utilized here, although to the more casual listener, the higher usage of various techno sounds and broken beats will be the indication of this evolution. Unfortunately, once these novelties get old, Artificial Soldier ultimately suffers from the same problem as most of FLA's albums - the general mood is always the same and too many beats and tempos are similar. Admittedly, when it's good, it's good - "Social Enemy", "Buried Alive" and "Dissension" are all top-notch tracks. "Future Fail", the collaboration with Front 242's Jean-Luc De Meyer is also absolutely amazing.

Artificial Soldier is probably one of Frontline Assembly's best albums; however, if the whole idea of EBM usually bores you, I would definitely not recommend it. This is certainly an album that only fanatics of the style will really enjoy.

Written on 10.11.2006 by
jupitreas
With Metal Storm since 2002, jupitreas has been subjecting the masses to his reviews for quite a while now. He lives in Warsaw, Poland, where he does his best to avoid prosecution for being so cool.
More reviews by jupitreas ››