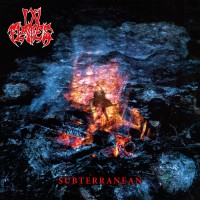 
I was never really keen on EPs. I've always had a feeling that you get too little for your money. Being a dedicated In Flames fan, I was aware of the presence of this EP but never felt the need to buy it (nor was I able to, since it sold out years ago...). Until I saw the reissue (there is a certain amount of confusion whether it was released in 2005 or 2006), that is. Nine tracks instead of 5, OK, that seems like a fine amount of additional pleasure for my 15C... So, what's it like?

From the piano intro for "Stand Ablaze" (building up the pressure until it bursts into melodic riffs) to the end of "Murders In The Rue Morgue," this album is fantastic! Being a guitar band per definition, In Flames delivers piercing riffs, which are followed by some competent drumming. This piece of work is something you could call "more progressive" compared to its predecessor "Lunar Strain," even to the infamous next album "The Jester Race"! Melodic death metal at its finest, guitars at harmony, spitting out riffs that intertwine during the songs, often changing the structure of the song completely (listen to "Subterranean" for example). The acoustic parts are still there and show a more gentle side of In Flames' musicians. "Biosphere" even features some riffs that you would easily expect from vintage bands such as Iron Maiden, only repacked. The Bonus tracks "Dead Eternity" and "The Inborn Lifeless" (the latter named "Dead God In Me" on "The Jester Race" album with different lyrics) are really interesting as well and offer a new insight to the already well-known songs. Two covers that follow, "Eye Of The Beholder" and "Murders In The Rue Morgue" (if you don't know who it was that In Flames covered here, you are no metal fan!) are, although just covers, really well done and, in my opinion, much better and heavier than the originals.

Are there any flaws then? Well, some things ought to be pointed out. Firstly, the vocals (courtesy of session vocalist Henke Forrs) are quite different to Mikael Stanne's growls on the previous album, and, being a little screechy, the change isn't really for the better. I guess one could say that this is subjective, but I seriously doubt that anyone will like this singer more than Stanne or Friden, for that matter. Also, the production isn't that good either, although it's better than the work on "Lunar Strain" and much better compared to... Hmm... Darkthrone?

All in all, this piece of work is not as good as "Lunar Strain" or "The Jester Race" but, as these two are the finest works in the history of melodic death metal, this isn't really a drawback. These 5 (+4 bonus) songs are superb and therefore receive my unconditional recommendations. If you are in need for some quality melodeath, this one has it over the top.