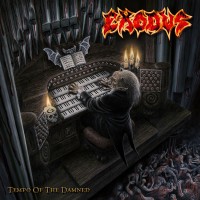 
Thrash metal fans rejoice! Exodus, one of the genre's most important bands is back. Released on February 2nd (the anniversary of singer Paul Baloff's death), "Tempo Of The Damned" is as much a tribute to Baloff and the entire bay area thrash scene as it is a fantastic rejuvenation of Exodus' core sound. To put it in blunt terms - this album is vintage Exodus and it rocks!! This is great news considering so many people have written this band off.

Think of what you would like to hear from this Exodus line-up (Gary Holt, Rick Hunolt, Steve Souza, Tom Hunting, Jack Gibson) and chances are that what you hear will be more than satisfactory. This is Exodus in all their uncontrolled, raging fury, albeit with a few minor additions to their classic sound, making this so much more than just a rehash. The first three tracks are an incredible kick in the head - a barrage of riffs, complex drumming (courtesy of one of metal's best skin bashers), angry lyrics and screaming vocals. Later on, the band experiments a little bit more, going for a bit of a stoner vibe in "Culling The Herd", a bit of a doom feeling in "Forward March" and even some nods to classic metal in "Shroud Of Urine". Naturally, the legendary Holt-Hunolt tandem provides us with a constant flow of excellent riffs and solos, while Tom Hunting plays so well that this album could well be a drum clinic. The album also features great production, with the bass finally being audible (a common problem with 80's thrash metal). The biggest surprise is actually Steve "Zetro" Souza, who's vocals improved beyond all expectation. Besides using his usual thrash metal Bonn Scott impersonation, Zetro now also screams, growls (!) and occasionally even sings (displaying an exceptional ability at carrying the melody). All of these elements are combined on the album's title track, which is probably the best track Exodus has ever done since "Bonded In Blood". This track, along with "War Is My Sheppard", "Shroud Of Urine" and "Scar Spangled Banner" has the biggest chance of becoming a bona-fide thrash metal classic.

The only (slight) stain on the facade of this fantastic record is that so many of these tracks are not new material. 'Sealed with a Fist', 'Throwing Down' and 'Impaler' are all old tracks which have been re-recorded for the purpose of this album (the first two come from a Gary Holt side-project and 'Impaler' is an early 80's Exodus track written by Kirk Hammet). Long time fans would have already heard these tracks and I bet they would be happier to hear some more original material. Luckily, these are all top-notch renditions by a rejuvenated band so it's not such a big deal.

Is thrash metal making a big comeback?? It sure seems like it. Destruction and Exodus already blew our socks off. Slayer and Celtic Frost are about to release some new material. This is all great news for thrash metal fans and I only wish other bands will follow Exodus' lead and release some truly excellent music!

Written on 06.02.2004 by
jupitreas
With Metal Storm since 2002, jupitreas has been subjecting the masses to his reviews for quite a while now. He lives in Warsaw, Poland, where he does his best to avoid prosecution for being so cool.
More reviews by jupitreas ››