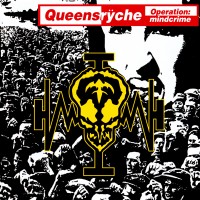 
Watch out, this is a masterpiece! Queensrÿche has always been able to stay away from this simplistic heavy hard rock trend rotten by some spoiled dick-heads with their traditional clichés and their shallow lyrics like 'Baby, I feel so alone!'. On the contrary, this band, far from collapsing into a disguting laziness, wrote some complex and well-structured songs and intellectual and extremely worked on lyrics. In fact, Queensrÿche is a real warmachine destined to fight against the establishment. This is confirmed by 'Operation: Mindcrime' which is at the same time ultra-polished and accessible to the masses.

This sensational album begins with the intro 'Remember Now', before the real starter 'Anarchy X', an instrumental track whose purpose is to launch the killer 'Revolution Calling'. Yes, the album is built in such a way that it tells a story with recurrent characters (Sister Mary, Doctor X, Nikki). so this fiction has a storyline that we discover all along the album.
Meanwhile, some energetic and sublime songs follow each other, with for example the hit 'The Mission' and its wonderful chorus on which we can admire the whole spectrum of Geoff tate's vocal abilities. There's also the very powerful 'Spreading The Disease' with its fast but harmonious structure.

Some songs are near to excellence ('Speak', 'Operation: Mindcrime', 'Eyes Of A Stranger'), whereas some other tend more towards something experimental and marginal like 'My Empty Room' and 'Suite-Sister Mary'. Also to be noticed the superb vocal performances of Geoff Tate on the very good 'Breaking The Silence'. Yes, because even if this album has catchy riffs and fabulous drumming, we can reasonably say that the real highlight of this band is Mister Tate's presence. He's got a voice sometimes close to Dickinson's, he's able to adapt to all the tones, he sounds easy on every song, his intense and emotional vocals take the album up to another level of tragedy. He is probably one of the best singers ever, simply excellent!

About the conception of the album, the best thing to do is quote Tate: 'I think the 'Mindcrime' is just wonderful, we've been inspired by the years of presidency of Reagan and Bush, and this is really the only thing I thank them for.'
Written by Gorey | 21.06.2004