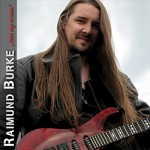 
Solo albums by guitarists are a common thing in hard rock and metal since a long time and if we already have guitar heroes like Vai, Malmsteen and Satriani, do we really need a Raimund Burke too? Did he just produce another instrumental show-off disc? Does he have something "new" and original up his sleeve? Can he hold his own next to the big ones in the guitar world? We'll see.

"Into My Arena" is Raimund Burke's third output, following his debut and a Christmas album. One of the special things about this CD is that Raimund isn't only doing the guitar parts himself, he also plays the bass guitar, the drums, the keyboard and did the recording, mixing and mastering and I should say he did a very good job on all of those! The only help he got is in the vocal department; singer Michael Keuter, appears on two of the songs, namely "Don't You Know" and "Wait For The Night".

My main concern with instrumental (or mainly instrumental anyway) albums is that they often tend to get boring. Luckily Mr. Burke recognized this problem and did something against it! Every track has a lot of twists to it without ever becoming messy, which is a pretty big accomplishment when you note how technical his playing is. He also blends a couple of different styles. Most of the time the music stays in the hard rock area, occasionally he lets a heavy metal riff or bluesy parts sicker through though, we also have a few neo-classical parts, but the main focus is almost always on hard rock. Also add the two tracks with vocals, which are pretty good hard rock tracks by themselves, and the really laid-back closing song "J.A.I.L.S." and you really can't complain of lacking diversity.

Let's return to the questions I asked at the beginning. Raimund Burke isn't one of the top best guitar players ever when compared to the big names, but he sure knows how to play his instrument better than most others out there! Apart from playing really technically he also gave a lot of attention to the song writing, something most soloists and instrumental bands seem to forget about. Next to that he also puts a really big bunch of emotion into his work.

So in the end this might not have been the best guitarist album I've heard so far, but this is really great instrumental hard rock plus two bonus songs with vocals. Recommended to fans of hard rock that like it a bit more technical!