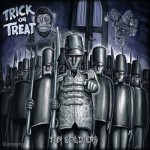 
As a reviewer I usually know what albums will be sent to me. And usually when I know I'm about to get something new, I google them to get a first impression. Only seldomly has this course of action gotten me as excited as with Trick Or Treat, who started out playing Helloween covers and now write their own songs.

The first thing I found searching the web for this band, was the absolutely hilarious artwork of their previous output, Evil Needs Candy Too. It didn't stop here though, Evil Needs Candy Too didn't only showcase a song named "Like Donald Duck" (including voice samples of everyone's favourite bird sailor), but also a fantastic heavy metal version (and video) of Cindy Laupers world-super-hit "Girls Just Wanna Have Fun" (Watch it here!).

Unfortunately I'm not reviewing the aforementioned debut though, but their second output Tin Soldiers. For melodic metal fans who know the geographic traits that go with their music; Trick Or Treat sound pretty much like a mix between Italian heavy metal and German power metal. For those among you that prefer a bunch of adjectives; the music is very melodic, light-hearted, cheesy (of course), has a lot of high-pitched vocals and is mainly mid-tempo. For those who like comparisons to other bands; Edguy and the more light-hearted Helloween-material wouldn't be too far-fetched.

There are a few issues I have with this CD. There's a lot of repetition going on throughout the album, especially where the vocals are concerned. They're good, but that doesn't mean they have to sound the same the whole time; some more variation would have been pleasant. The next thing is that I can't find a single really nice'n'heavy riff. In general some heavier parts wouldn't harm the band (also in regards to the repetition issue). Another thing is the missing originality; however that that counts for most of today's metal scene anyway.

Apart from these concerns there aren't a lot of bad things I can say about Tin Soldiers though. It's a good power metal album with a big bunch of feel-good vibes. True highlights of the CD are "Hello Moon" and the ballad "Tears Against Your Smile", both featuring an excellent Michael Kiske and the last song; "Tin Soldiers Pt. 2".