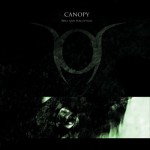 
Some of you metal listeners may not have heard of this Swedish Melodic Death Metal combo named Canopy before (I personally know a couple of people in this boat!) but perhaps this review will change this fact. The album in question is named Will And Perception, which keen researchers will notice is the same name as an EP from this same band from 2005. For those who haven't put two and two together, this album is a re-release of that EP, albeit with two new tracks and one from their very first EP. However this isn't exactly a compilation CD as all the tracks from the original EP have been re-recorded and "modernised" if you like. So what have Canopy done to freshen up their music? Read on...

From what I've heard of the older Will And Perception tracks as opposed to the new ones, the song structures themselves haven't changed a lot. You can probably see this yourself from the lengths of the songs. The tracks have been given a good dust off and spit polish however as they sound more refined and with much better production. Whether or not this is a good thing will be up to each listener's tastes. I don't mind under-produced Death Metal with some melody, just as I can enjoy the clean professional sounding well produced Melodeath. As long as the music itself it well written and performed. Which brings us to another point of the album worth discussing...

Talking about Will And Perception as a whole, the album sounds pretty good. It does put the "melodic" back into Melodic Death Metal if you know what I mean, so it will be most likely enjoyed more by fans of this style of metal. The album can be reasonably heavy at times but it is more than balanced out with melodic guitar rhythms. The vocals on the other hand are understandably more extreme and actually really quite good. Fredrik Huldtgren can really hold an extended growl and his vocals are quite deep. The effect can give a sort of doomy feeling to the music.

While this isn't an album full of original music, the new Will And Perception from Canopy is still worth a listen. Most of the songs are individually nice enough to listen to (except maybe "Counsels And Maxims" with it's pop-like obvious computer generated drum beat) which is what I think counts with releases like this.