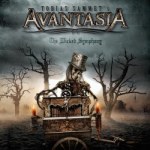 
A couple of years after The Scarecrow shook things up, Tobi is back with not one, but two new albums of brand new matieral featuring the cream of metal's vocal talents. Don't expect Metal Opera all over again from these albums, stylistically they are not too dissimilar from the previous album, as they mix elements from power metal and stadium rock to good effect.

The Wicked Symphony may initially appear the better album of the two. The songs here make the best first impression, some of them may even keep this favourable tag once both albums have been digested. Songs like the fantastic "Blizzard On A Broken Mirror" and the long opera of "Runaway Train" may seem like the best Avantasia material you will have heard for a long time. Tim Owens gives the recording performance of his life with "Scales Of Justice", and "Forever Is A Long Time" also provides an infectiously catchy chorus.

The album isn't without its dull moments though. "Crestfallen" and "Black Wings" might end up being skipped each time you give the album a spin. "Wastelands" has all the elements required to give any power metal obsessive immeasurable joy with Michael Kiske singing along to a traditional up-tempo power metal stomper, but for some reason this time there isn't any joy to be drawn from hearing his silky voice one more time. Perhaps it feels a little hollow or predictable, perhaps we have just heard it all before.

Regardless, The Wicked Symphony may initially be your number one pick, it may ultimately be your number one pick. It is a great album that clearly shows Tobi still has creative juices running through his veins. It is fair to say that you need to be able to appreciate all the elements present on this album; not just the power metal sparks, but also the softer sides that verge on rock to fully appreciate this work. Avantasia isn't about pigeon-holing and musical styles, it is about good, melodic metal and rock. Tobi does it well, and The Wicked Symphony is a welcome edition to the catalogue.

The Wicked Symphony has the feel of the safer album, where less risks have been taken. "Blizzard On A Broken Mirror" and "Runaway Train" are the only real glimpses of absolute greatness, but on the whole The Wicked Symphony is a more solid album than its counterpart. Inevitably however with the release of a double album, both albums have their ups, but they also have their downs. The Wicked Symphony is the more consistent, but perhaps Angel Of Babylon has the higher highs and lower lows.