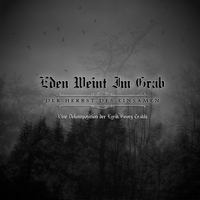 
Since this is not a normal metal album, it is hard to make people understand what makes this record so brilliant. It contains neither guitars nor bass nor drums in the normal sense of metal. The whole music is based on the lyrics, which simply are poems of the Austrian expressionist Georg Trakl, who was born in 1887 and committed suicide in 1914. The musical side of this album consists of orchestrations made with a computer and a keyboard, slightly drums here and then and the incredible voice of mastermind Alexander Paul Blake.

Now one could rightly ask the question what makes this appear on a metal website and what makes a gothic black metal band create such a non metal album. Well, this album is pure gothic, it is pure black, it is only not metal. But in its entity is has a lot in common with metal, considering the atmosphere created. The poems are simply the best lyrics you could imagine in the metal style Eden Weint Im Grab usually plays, sometimes telling of melancholy but actually the most time dealing with pure black madness. Listening to this album one surely could never imagine these poems sung and spoken more suitably than with this voice, rhythm and melodies. The melodies used in the songs diversify between creating only a background atmosphere and being ingenious itself, e.g. in one of the best songs, "In Ein Altes Stammbuch." Alexander Paul Blake uses his voice most of the time as a narrator, where the ways he pronounces different parts of the poems are interesting. "Siebengesang Des Todes" contains one his more common vocals, a wonderfully mad black metal voice. The almost perfectness of the atmosphere is of course difficult to understand for non-German speakers because it arises from the world of Georg Trakl, who is in my eyes the greatest poet ever, putting Goethe, Schiller and Kafka into the shade with his madness.

The best piece of this album is the last track, "Gewitterabend," where Alexander Paul Blake creates an unequaled atmosphere with rain, thunder and ravens to a reverent told poem that makes one shiver. Another highlight is "Elis," in my eyes the best poem and awesome set to music.

I don't believe that non-German speaking metalheads will all share my opinion but those who understand the lyrics and love expressionism and the world of Georg Trakl only can admit that Eden Weint Im Grab established a unique album fitting to a lonely, rainy evening scene. Der Herbst Des Einsamen, which translates to "The autumn of the lonely one" contains exactly what its title promises.