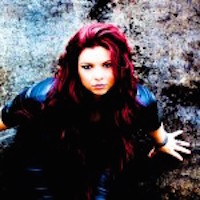 Multi-instrumentalist and vocalist Leah has captured the hearts of many here at Metal Storm. She was very kind to open up about her music, lyrics, and inspirations.

Enjoy the splendid "Arcadia," which opens her latest record


Susan: How was the writing process different for Kings & Queens versus Of Earth & Angels?

Leah: The way I wrote the songs for K&Q wasn't much different than all the other albums. I wrote the core of the songs, had all the chord progressions, lyrics and melodies pretty well figured out. After Timo came into the picture, the songs really took more shape at that point.

Susan: Can you tell us about your vocal choices on this album, and how they differed from Of Earth & Angels?

Leah: Yes, I clearly have the same voice, but I wanted to emphasize different aspect of my vocals on this album a little more. I've always admired people like Devin Townsend who have many different "voices" that they use for different effects or dramatics, and I aspire to have that ability as well. From what I've heard, there's many female vocalists who sing very "hard" or very "classical" but not too many who mix it up a lot. So my goal was to bring out both my soft "Enya" voice, my mix voice (which is a blend of head and chest voice), and a little bit of operatic style. I also throw in some of my soul roots once in a while, as you might notice. I like some vocal flexibility and R&B runs sometimes (which is no different than a guitar solo, in my opinion). :-)

Susan: Kings & Queens seems to add slightly more Middle Eastern and world music influences than in the past. Can you tell us where this inspiration originates?

Leah: The inspiration derives from the good vibes I get from those types of instruments. Whenever I hear world folk music of various kinds, something strikes a chord in me and I just really like it. I can't help but incorporate whatever moves me into my own songs.

Susan: Do you or have you formally studied any world music styles?

Leah: Haha, not at all. Maybe one day. For now, it's all coming from the heart.

Susan: What are some musical avenues you'd like to explore next?

Leah: I could really see myself doing a more acoustic-Celtic album, to change it up and dig into the more worldly-folk flavors. And of course, more metal too!

Susan: You bring many great collaborators into your music including Berend Curbois of Blind Guardian and Timo Somers and Sander Zoer of Delain. How did you meet them and form working relationships?

Leah: I met them through Christian Moos of Spacelab Studios in Germany. Christian mixed my Otherworld EP and I let him know I was looking to do another studio project and that's when he introduced me to Timo. From there, Timo and I hit it off and he helped me find the perfect guys for drums and bass!

Susan: Did they lend solos only, or were they involved in any of the writing processes?

Leah: Timo really helped me shape the songs. Most of the songs were already there, but he really took them to the next level, which is what they needed. Each of the guys put their own stamp on their parts, which I totally encourage. I am not a fan of cookie-cutter albums. If I am working with talented musicians, I want their unique flavors and characters to come out in the songs, otherwise what's the point?

Susan: Along these same lines, what can you tell young artists about the importance of networking?

Leah: For me, networking is everything. It's important to make genuine connections with people, and not come off as an artist that's so hungry for success they step on everyone in order to achieve it. That really won't last long. I have found that if I give, people often reciprocate.

Susan: Judging from the creative music you put out, I'd be interested in knowing what other art inspires you, such as music, literature, or visual art?

Leah: I'm a very visual person, so often I'll be inspired by the mental images of books I'm reading, and films as well. I'm sometimes inspired by a mood, as vague as that sounds. A certain vibe, if you will. I'm just feeling a certain way, and it comes out as music. It can be a mood from a film, song or book, though. It can come in any form. There's really no rhyme or reason to it.

Susan: What is your background like? Have you played in other bands, or performed non-metal music? Or been involved in other arts besides music?

Leah: I've always been an artistic person. I've been drawn to and experimented with dance, painting, writing, music, sewing, and a number of other things. I can't seem to stop! As for music, yes I was in one other metal band as a teen, which was good experience. I did some acoustic solo stuff and performed once in a while as well. It was before the social media days. If I had back then what is available to me now, who knows what would have happened.

Susan: What inspires your lyrics, and do they usually come before or after the music is written?

Leah: I usually always have the music and melody first. I even have an idea of where the syllables need to go once I start humming out the melody. Then I often write the words, the concept and everything all at once, as I go along. Sometimes this happens very easily, and other times I have to work through writer's block like people often do. I get my inspiration from doing some research, or just a general theme in my brain :-)

Susan: Could you share any special stories or experiences behind the lyrics for one or two of your songs?

Leah: Sure. On the new album, "Kings & Queens" I have several little story lines and themes I used in the songs. In "Palace of Dreams" I created a little story plot for the lyrics, which went as follows:

This song is a story about an evil tyrant (the Usurper, "Tyranus es") who has put a spell over the Kings and Queens of the land. He has been working in the shadows to set up a one-world dictatorship for many centuries. This usurper character only works through secret societies, dirty politics, the media and the naive masses. He is always hiding in the shadows, but presents his insidious ideas as wonderful solutions to the rest of the world through his deceived, but loyal subjects. Because the Kings and Queens of the land are under his spell, they also deceive their own sub-kingdoms and all who will listen to them. They believe the Usurper has the answers they need to end their problems and support his idea to reign from a round tower that reaches to the heavens, which he wants to call "The Palace of Dreams". Despite the Usurper's greatest attempts to re-build this tower which was previously destroyed (that's another story for another time), he knows he is destined for failure, and it's just a matter of time. A few faithful, underground commoners remember how to break the spell, and work to spread the word, though it might mean their life. As the people of the lands begin to hear these small whispers about the truth, the spell begins to break and cracks in the beloved, unfinished tower become increasingly bigger and more obvious to the rest of the kingdom. After a while, all the Usurper's secrets are out and the people of the kingdom find out about the cursed spell that has bewitched their Kings and Queens, their lands, and their kingdom.

I don't think the story is quite finished yet, so perhaps there will be a Part 2 in the future..

In the track "Heart of Poison" a character is caught in feeling extremely mortal and limited in wisdom and knowledge. In the chorus, they reach out to the master who is unlimited and has all the secrets. The Latin reads "O lord of the mysteries (i.e., secrets), O keeper of the riddles (i.e., the enigma). In the end, they realize the riddle of their limitation is their own fallen nature.

I am not always able to articulate the theme or story of the song until it's actually finished and I think about it! They seem to take on a life of their own, which is the fun part.

Susan: Thank you for sharing your music!

Leah: Thank you very much, and I hope you and the readers enjoy the new album!

Posted on 20.02.2015 by
Susan
Susan appreciates quality metal regardless of sub-genre. Metal Storm Staff since 2006.