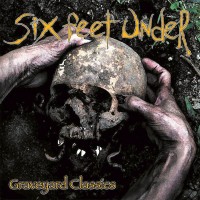 
This album sucks. There is no need to be erudite or civilized about it; the only reason I subjected myself to the entirety of this album was so I could warn the world of its horrors. Graveyard Classics is easily among the purest and most repugnant drivel on the death metal market nowadays. Disregarding completely the fact that Six Feet Under is by the very circumstance of its existence a permanent black mark on Chris Barnes' formerly impressive record, this album alone is cringe-worthy enough to merit Barnes a lifetime ban from singing.

By far, the most offensive aspect of this album is the vocals. Chris Barnes is simply not capable of reproducing the brutal and demonic growls that made him legendary during his tenure with Cannibal Corpse, and while his skills had not at this point in time reached the level of degeneration in which they now rot, it is painfully obvious that Chris needed to find a new career a long time ago. At times, he manages to bring back some of the force and hostility of the olden days, and for a few beautiful moments the listener can enjoy the sound of a good, old-fashioned death growl done the right way. Three seconds later, the feeling of satisfaction vanishes with the arrival of Chris's high-pitched snarl. Picture Attila Csihar's grandmother. Now picture her being strangled. The sound you hear is Chris Barnes attempting to alter the pitch of his growls. It is not pretty.

Everything else sounds merely average and uninspired. There is no dearth of talent in this band (Chris Barnes notwithstanding), and, in fact, this album boasts the bass work of former Death member Terry Butler. For some reason, however, the performance is trapped in that dull nether region between impressively professional and endearingly sloppy. Literally every song on this album sounds like every other song on this album. No variation, no inspiration, no effort, no clear purpose except to provide a laundry list of bands that the guys in Six Feet Under listen to when they are not churning out bubbling buckets of suck like this one.

Graveyard Classics has no point. The song selection is a work of art; the performance is not. Chris Barnes is simply no longer up to the task of fronting a band. This album is a huge disappointment in basically every way, since it gives you neither the satisfying experience of hearing an enjoyable album nor the amusing experience of hearing a particularly awful album. It is terrible, but in a familiar way that saps all the fun out of it.

Do not humor this band any further.