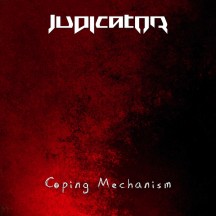 
Judicator is a US power metal band that, in the last two years, managed to get some space for itself, especially with the critically acclaimed 2013 album Sleepy Plessow. The band's third album, At The Expense Of Humanity, will hit us in September, and this EP Coping Mechanism gives us the first taste of what we're about to get.

For the first time in its short history, Judicator sees a true band flanking the two original kingpins, vocalist John Yelland and alltheotherstuffer Tony Cordisco. And thank God it's like this. Despite the great work the two bigwigs did in Judicator's previous album, Coping Mechanism has another spin, displaying the creative and cohesive sound that only a full band can convey.

This can be easily noticed in the second and third track of this short EP, that are respectively a rearrangement and an acoustic version of two of the fans' favourites off 2012's debut album King Of Rome, "Tu N'es Pas Mort, Coquin?" and "The Iron Duke". In addition to an improved mastering (kudos to Lascaille's Shroud mastermind for this), the two songs, especially the first one, show what a sextet can do more than a duo. "Tu N'es Pas Mort, Coquin?", a really good tune already in the original version, gets Kaioken-ed thanks to fresher ideas, real drums instead of programmed ones and an overall better performance of both instruments and Yelland's improved yelling. Sorry about that, I had to do it.

The only song in Coping Mechanism that will make it to At The Expense Of Humanity is the EP's title track, an unconventional track as it takes some spins to really get stuck in the listener's head, which is a rarity in the power metal camp, that trusts a lot the earworm factor. The most crucial thing that "Coping Mechanism" displays, more important that Tyler Sherrill's mind-blowing solo at the keys, is the fact that the band is finally choosing its path. King Of Rome and Sleepy Plessow, starting from a not-so-original speed power metal a la Helloween or Blind Guardian, showed increasing signs of personality, but "Coping Mechanism" embodies the Judicator sound, that cannot be confused with any other band's.

Judicator is finding its true soul and already found the full band that can carry on the band's future endeavours. Coping Mechanism is still too short to give proper expectations on the upcoming full length, but it's surely enticing enough to keep fans waiting until September.

Stream or buy the EP right at this location.

Written on 05.05.2014 by
R Lewis
Hopefully you won't agree with me, diversity of opinions is what makes metal so beautiful and varied.