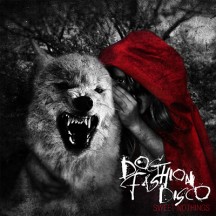 
Babe, is this for real?

Say nothings and you mightn't get anywhere, but say Sweet Nothings and you'll wind up here. Where is here exactly? Here is another reunion and eight years since Adultery was committed, and it's best to bet that there lurks a bit of madness behind the new utterances from the Rockvillian culprit, Dog Fashion Disco.

Dog Fashion Disco aren't quite as mentally unstable as Mr. Bungle, but they do well to have themselves housed in the same asylum, albeit in a wing with saner denizens. Their speciality is hard rock and metal mashed together in avant-garde amalgam with untethered eclecticism and myriad borrowings external to metal, resulting in another set of strange songs you never really knew you needed to hear. Somewhat sinister, always cajoling and generally upbeat, this toe-tapping tirade is delivered with all the sternness and no-nonsense attitude of a pack of clowns. Speaking of which, what is the word for a group of clowns?

Amongst the Sweet Nothings there's that sexy sax to sate all the horny jazzmen and jazzladies out there, and there's really no saxier breakdown than getting truly "Struck By Lightning." And funk me, that title track! With this reformation album Dog Fashion Disco succeed where others often fail; producing an avant-garde record that is as smoothly digestible as it is adventurous and varied. It's not an easy task to create what is both accessible as well as quirkily diverse in its influences. The metal tones contained within are also nicely ranging, from the bursts of modern thrash reminiscent of Annihilator in the circus frivolity of "War Party," to the much more avant-garde progressions of "Envy The Vultures."

The abundance of distinguishing features are too numerous to list in short, however what can be said is that their spread throughout the record keeps a little surprise up the sleeve of each and every track. Instrumentation moves from funk to flute at the drop of a high-hat, and the vocal range of Todd Smith fills many roles in a similar multifaceted style as that possessed by Mike Patton himself.

The production mars the rhythmic qualities to the record and the drums in particular, whilst providing an effective beat, resound dully with a noticeable plasticity. Otherwise the instrumentation and vocal arrangements are heard clearly in all their assorted glory.

The dapper Dog Fashion Disco have reunited once again to tell us all intimately; shhh, this one's for you baby.