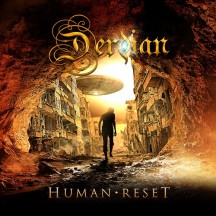 
One of the things I love about writing here is that it brings me to listen to a lot of stuff I wouldn't find the time to check out otherwise. Derdian's latest is one of these albums, and a release that no one that has ever enjoyed power metal should miss.

The huge inheritance of classical music into the Italian culture has also made its way through metal, as Rhapsody Of Fire and their many copycats have shown. Derdian's music is also incredibly influenced by classical traits, even if not in the way of their famous compatriots, since they meld the two genres creating a sound that could only be compared, if needed, with that of the Tarot-era Dark Moor. Their theatrical sound found the perfect match in 2012, when new singer Ivan Giannini joined the band and, with his scenic and very "human" voice, completed the picture perfectly.

Combining baroque and epic, studied finesse and overwhelming catchiness, Human Reset presents itself as an ultimate power metal album, enriched by the clever use of backing vocals and by many variations on the theme offered by the long creative soloing.

What's really stellar about Derdian's fifth release is its equilibrium. It's perfectly balanced in the whole, so that also some tracks that taken alone are not this great, gain a new meaning in the service of the greater purpose of a true album. Thanks to this and to the fact that the quality remains at a sky-high level for the whole release, despite clocking at over an hour, this isn't by any means a ponderous listen: the tracks flow easily, one after another, one requiring another, one completing the others.

On the lyrical side of things, there are again positive news as the band continued in their process of abandoning fantasy concept albums and focusing on individual tracks about more present-day topics.

Given the fact that Derdian used to release albums at a three year rate, and that Limbo hit the stores just in 2013, it's amazing how Human Reset doesn't sound rushed at all but, on the contrary, is an example of how a release should be taken care of to the smallest details.

Don't try to label this, since symphonic power metal, progpower or European power metal are all definitions which are both right and incomplete. Therefore, don't think to know what this sounds like from the cover, the tag, or from a single track. Human Reset is an album as they all should be, and as so it must be listened.

Written on 14.08.2014 by
R Lewis
Hopefully you won't agree with me, diversity of opinions is what makes metal so beautiful and varied.