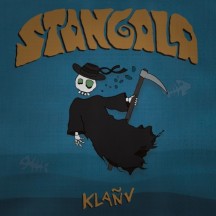 
When last we left the cloak wearing Frenchies of Stangala they were tossing traditional Celtic/Gaelic instruments into some crunchy stoner jams. Seems they've been alternating hits on the bong and gobbling angry pills.

The approach is still kind of the same, stoner rock as a basic launch point. They've still added in some traditional instruments and arrangements. Only this time there is a lot more bite and bile.

While the intro tune is a bouncing affair, upbeat wah-drenched, at times funkified with backing from a horn section. Right off the bat you know you're not in for a normal metal album. Something a lot more avant-garde, scattering a smattering of traditional with current music.

After that, starting with "Hent Loar", you can hear the angry pills start taking effect. The music slows to a doomy dirge while the vocals are just howled with enough vitriol to make the most hardened black metal warrior's hair stand on end.

The album continues to dabble in the alchemy of old and new instrumentation and styles. "Lutuned An Noz" ratchets up the tempy in a near BM fashion, while the title track has an upbeat catchy melody that sounds like The Happy Piper auditioning for a ska band.

They've got some Chillsville in the largely acoustic "N'eus Ket Dremmwel Hiviz", whereas "Jan" (Not the forgotten middle Brady daughter) has a positively headbobbing upbeat guitar riff.

Klanv just really bounces all over the place, in general feel from song to song, as well as within songs. They aren't crazy out there avant-garde like some of their French mates, but to paraphrase that Alamo-beer drinking animated Texan, Hank Hill, "Them boys ain't quite right."

It's a groovy album that perhaps reminds me, in spirit if not in execution, of some of Cathedral's more out-there songs.

If the idea of a retro stoner doom band going all folky-avant weird sounds even remotely intriguing to you, this is worth a spin.