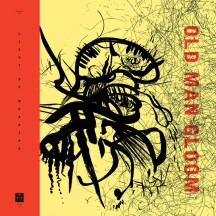 
After the surprise dessert-cum-surprise starter that was Seminar IX: Darkness Of Being, we finally get to taste the main course, Seminar VIII: Light Of Meaning.

Based on their previous antics, it was no surprise that when Old Man Gloom announced Seminar VIII: Light Of Meaning would be released in late May 2020, they had also produced a second album that would be a surprise release on the same day; however, after the COVID-19 pandemic forced much of the world into lockdown, the band decided to stream Seminar IX: Darkness Of Being early. As nice a gesture as this was, it was an unusual situation to be able to hear the "bonus" album 2 months before the album that had actually been announced became available. However, at last we can hear both albums together, and following The Ape Of God in 2014, Old Man Gloom again demonstrate that they can produce and release two quality records at once.

As far as differences between the two albums go, two in particular stand out to me. One, the band put a lot more emphasis on the noise part of their sound on Light Of Meaning. For sure, there are patches of dark ambience or eerie noise on Darkness Of Being; however, almost every song on this album both begins and ends with at least a minute of this, meaning at least a quarter of the runtime is comprised of patches of noise. On the one hand, I can see the intention of maintaining an air of unease between tracks with these stretches of ominous ambient music, building tension before the next burst of punishing sludge. At the same time, I feel like these stretches could've been halved in length and still delivered the same intended outcome. However, these noise elements are also integrated into tracks quite successfully, particularly during some of the dirge-like sections of closer "By Love All Is Healed". Additionally, once you set through these sinister interludes, the sludge cores of each track are consistently compelling, making the wait more than worth it.

The second difference for me was that the actual songs outside of these interludes sound more 'conventional' than some of those on Darkness Of Being; there's nothing here as esoteric as "Canto De Santos", nor as divergent a track as the acoustic sing-a-long "Death Rhymes". What you get here are six powerful, (predominantly) mid-tempo stomps, each of which brings all the primitive fury one would hope for from an Old Man Gloom song. The primary exception to the 'mid-tempo' descriptor in the previous sentence is opening track "EMF", a faster piece with some twisted guitar work, a burst of adrenaline to kick off proceedings. Light Of Meaning is an album of two uneven halves - the first three tracks have an average runtime of just over 4.5 minutes, whereas the latter three average over 10 minutes in length. Of these opening trio, the standout to me is "Wrath Of The Weary", a grinding march of pounding sludge punctuated by guitar licks, somewhat reminiscent of "Shoulder Meat". The vicious growls and atmospheric guitar tones elevate this track above the rest of the short cuts from Seminars VIII and IX; however, the real treats come in the second half of Light Of Meaning.

"Final Defeat" has the most tortuously extended intro (you can skip to 3:30 and not miss much), as well as a similar lengthy outro (the actual metal makes up less than half the song), but when the action finally arrives, the payoff is worth the wait - a collection of fiery riffs with hair on their chest, with some intriguing Mastodon-esque clean guitar filtered in at times. The song, along with others that follow it, also see a relative novelty for the band in the appearance of clean vocal parts. The band have had tracks with singing before, such as the aforementioned "Death Rhymes" and "Crescent" prior to that, but I'm not certain they've featured in the band's metal songs prior to this record. I'm not entirely sure who contributes these, but I'm guessing it's Stephen Brodsky, who joined the band in 2018 following the death of Cave In bandmate and former Old Man Gloom bassist Caleb Scofield. As tragic as Scofield's passing was, Brodsky was the most obvious choice to replace him given his previous collaborations with other members of the group in Cave In and Zozobra, and he adds a new dimension to the band.

"Calling You Home" further expands on the softer side of the band, staying in clean territory for its entire first half, with this atmospheric prelude setting the scene ideally for when the intensity, whilst still restrained, is turned up a notch; more than anything, this song made me think of some of Neurosis's work. Rounding out proceedings is "By Love All Is Healed", which opens with a riff strikingly similar to the one that dominates "Procession Of The Wounded" from Darkness Of Being. Had the band's initial release plans come to fruition, this would likely have worked as an immediate connection between the end of Light Of Meaning and the start of its surprise sibling; as it is, hearing it a couple of months after Darkness Of Being was shared with the public, it serves more as a late-stage callback to that previous record, bringing the double-header together in a circular manner by finishing where it first started. As curious as this little feature is, the rest of this closing track acts as a lengthy, brooding outro to the album, delivering a suitably final curtail fall with the extended droning crawl that makes up the bulk of the track.

Written on 24.05.2020 by
musclassia
Hey chief let's talk why not
More reviews by musclassia ››