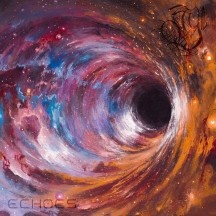 
When I first heard the name Wills Dissolve, I expected an Isis clone post-metal band; instead, Echoes is an extreme prog epic of the finest quality.

Doing a single-song album is always a bold move, particularly on a sophomore record. And yet Houston quartet Wills Dissolve, presumably named after the track from Isis' Panopticon, have absolutely nailed it with Echoes, a single 30-minute track narrating the journey of an astronaut headed towards a black hole. The album is spacious, with stretches of semi-ambient atmosphere, yet not a second of the runtime feels wasted or superfluous. Although Echoes is primarily melodic, the band are still very capable of switching to heavier approaches, with extreme metal patches scattered across the album. With a great feel for pacing, compositional structure, melody and atmosphere, Wills Dissolve have delivered a record that is seamless, engrossing and hugely replayable.

Perhaps due to its position at the forefront of one-song metal albums, I can hear a hint of Light Of Day, Day Of Darkness by Green Carnation during the gradual build-up of the opening few minutes of Echoes, as the guitars take form and the electronics develop the atmosphere. Both clean and harsh vocals appear on Echoes, but the former turn up first, and whoever does the sung vocals on the record (there are three individuals credited as vocalists on their Bandcamp) has a rich, evocative tone. The tone of the music is somewhat melancholic in these first couple of minutes, but a gradual sense of menace and danger creeps into the melodies used by the band, until the first heavy crunch and growls take over. I would say these initial early riffs don't quite fulfil the sense of expectation built by the introduction; however, once the first shredding guitar solo emerges, the band slickly transitions into a far more powerful segment driven by emphatic double bass rolls.

From that point on, it's segment after segment of beauty or intensity, whether it's a delicate acoustic guitar/lead guitar solo combo that nails the sense of joy that early Dream Theater could deliver at their best, a Kalisia-esque extreme sci-fi prog sound with Cynic-style vocoder vocal effects, a slack, atmospheric jam that has me thinking of New Keepers Of The Water Towers amongst other bands, or a dozen more parts. There are plenty of potential band references that came to mind whilst listening to Echoes, including Persefone (particularly in the softer moments), Riverside, Devin Townsend, Opeth, Obscura and Arcturus. However, Echoes doesn't feel like a collage of the work of others, but its own beast, one inspired by the history of metal but formed into a distinctive standalone work that can be entirely enjoyed on its own merits.

I was trying to find anything in the record I could constructively critique to provide some balance; however, aside from that initial minute or so during which the metal first appears (which feels slightly underwhelming when set against the rest of the record), I'm struggling to come up with anything really. I probably find myself slightly preferring the more melodic prog parts of the album, but the extreme sections are very effectively employed to convey the increasing distress and peril of the astronaut. These sections vary, whether featuring more up-tempo blasting and the use of disorienting dissonant guitar solos, or slowing down and taking things in a doom direction near the end (when the astronaut is succumbing to the void). Wills Dissolve are also very adept at mixing up the use of clean and harsh vocals during the metallic portions of Echoes for maximum impact, with the slightly Persefone-esque clean vocal tone really adding to the album's atmosphere.

Capped off by a scintillating guitar solo and soothing flute outro, Echoes is an excellent album from a young band, pure and simple, and the first one released in the second half of 2020 that I can envisage myself returning to regularly for years to come. Wills Dissolve didn't deliver the Isis worship I was expecting from their name; they produced something far more exciting.

Written on 29.08.2020 by
musclassia
Hey chief let's talk why not
More reviews by musclassia ››