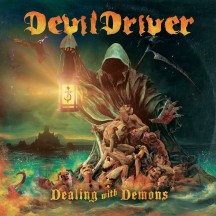 
By demons be driven.

Two years in the making and six years since their last record of original material, DevilDriver fans are a patient lot, with the band set to reward this virtue with a double dose of groove-laden metal separated into two servings; Dealing With Demons I sees the light of day in 2020, with the second part due in 2021 at the time of writing.

It has been a turbulent decade for the band, seeing a decline in fortunes, departure of key members and a series of mixed albums, but DevilDriver to their credit have ploughed through this with determination. As if to mirror these mixed fortunes on record, Dealing With Demons I starts off awkwardly with two so-so tracks before finding its mojo and hitting its stride, giving listeners momentary worry that the band hadn't yet turned things round. "Keep Away From Me" is probably the best summation of 2020, but also a warning to listeners to do as the song says and skip this opening track.

With the turn of a new decade, Dealing With Demons I offers fans hope that the band are closing the book on the prior decade and making a fresh start with the new one; from "Nest Of Vipers" onwards, the tracks are a marked improvement from the opening duo, as well as much of their output in the 2010's. While the band don't hit the heights they used to hit with a high rate of frequency back in the days of Pray For Villains, DevilDriver offer a collection of songs that are still of good quality and will stick in your head long after the album has finished.

Much of the album is formulated around the more mid-paced chug and double bass showcases with occasional bursts of higher tempo, with "Nest Of Vipers", "The Damned Don't Cry" and "Wishing" being the cream of this crop of tracks. The latter is built around a haunting vocal performance that is a unique twist and adds a level of dimension to help drive the album away from any potential mid-album slump.

Fafara is much his usual self, leading the charge with that unique roar of his that has been a regular voice on metal radio in the last twenty or so years. He puts in his strongest performance on "You Give Me A Reason To Drink", which sees Fafara get some much-needed weight off of his chest and thrown at you to knock you off your feet.

Although they have been in the band for five years and counting, Tiemann, D'Amond and Ibarra are markedly blank in terms of character with respect to their playing; while they play with an admirable level of quality and precision, whether by directive or design they don't offer much personality in their performances. The parts are solid and they are able to show that they have talent, but at the same time I couldn't identify them from their music, with no audible signs that would hint at who was behind the instruments.

The album does sit in the mid-tempo range a bit too much for its own good, lacking the more upbeat moments to grab the listeners by the head and compel them to move their head; as it is, you are left with songs that hint at those bursts but never in a big enough dose to take hold of the listener. "Witches" is a prime example of this; given that the band purportedly had 48 songs written for this project, I would have suggested they switched one the faster ones in instead.

The title track starts off a run to the end of the album that ensures the album doesn't finish in the same manner the album started, ending on a high note and giving fans hype and belief that the second instalment will be just as good.

Dealing With Demons I is a marked improvement for DevilDriver and breathes new life into the band; having gone through a decade where Winter Kills was the only real record of note, it offers fans hope that they're turning a corner at the turn of the decade, harkening back to the band's glory run in the 2000's if not quite matching it in terms of quality. Well worth listening to for fans of the band or indeed even lapsed fans of the band, welcome back Dez, it's good to have you back.

Written on 14.10.2020 by
omne metallum
Just because I don't care doesn't mean I'm not listening.
More reviews by omne metallum ››