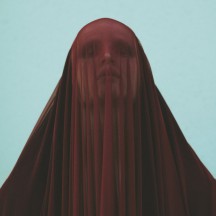 
The stoner metal exports of Poland vary from the thoroughly traditional (Dopelord) through to the musically adventurous. Sunnata fall firmly towards the latter end of that spectrum, and Burning In Heaven, Melting On Earth is another ambitious journey, one that is, with one or two exceptions, broadly successful.

My review of Sunnata's Outlands, one of the last I did as a guest reviewer, mentioned my enjoyment at their distinctive fusion of stoner, psychedelic, sludge, post-metal and raga elements to make something that felt unique without coming across as overtly "different". Outlands saw the heavier sound and lengthier songs of their previous record Zorya become more condensed, ritualistic and atmospheric. As such, I was slightly thrown and a bit concerned when I heard the first song released from new album Burning In Heaven, Melting On Earth; the dark tone that the soft intro of "Crows" attempted to convey didn't come across effectively, and the heavier parts just felt disjointed, particularly due to the vocals. There are parts of the track that I like (particularly the guitar solo before the outro), and in general I've warmed to "Crows" since its initial release; however, it hinted at a potentially unconvincing change of direction from Sunnata that could lead to Burning In Heaven, Melting On Earth being a letdown. Thankfully, the rest of the album is far more successful, whether dabbling in new territory or carrying on with elements that made Outlands so enjoyable.

Others may enjoy "Crows" more than I do, in which case the return to the atmospheric raga-influenced eeriness found in several tracks on Outlands on subsequent song "God Emperor Of Dune" may not be as eagerly received as it is by me. Personally, although I've enjoyed the band chucking out meaty stoner/sludge riffs on the past couple of albums, I find these quieter, psychedelic stretches to be where Sunnata really come into their own. The gradual progression of the guitars, drums and vocals provides a post-rock/metal feel as the volume knob is slowly dialed up; there's subtle hints of malevolence buried within the intensifying guitars and overlapping vocals that give trepidation to listeners wondering where this journey is leading to.

No other track leans this heavily into the ritualistic vibes of "God Emperor Of Dune" (well, maybe "Völva (The Seeress)"), but these psychedelic elements are utilized on the remaining tracks of the album, albeit more as a small piece of a larger puzzle, such as in the form of the female vocals accompanying the heavy march in the second half of "A Million Lives". "A Million Lives" is the first song here to really remind you that Sunnata are based in stoner rock/metal, with its fuzzy guitar tone and driving rhythm. The song also puts the eerie clean and slightly harsher vocals styles side by side as they alternate lines; I will say that if there was one thing I felt slightly lets down Sunnata at times on this album, it's some of the vocals. They never really concerned me on previous albums, and they generally do the job on Burning In Heaven, Melting On Earth, but there are more moments than I would like where the clean vocals sound off-pitch, something that felt particularly noticeable in moments on "Way Out".

Outside of those occasional issues with the vocals, I find the album really satisfying after "Crows", whether it's the driving stoner rock of "A Million Lives" and "Black Serpent", the heavy choruses of the latter song, the drones featured in "Völva (The Seeress)", or the melodic melancholy in the latter stages of "Way Out". The record features a healthy mix of parts of Zorya and Outlands alongside a number of new approaches or ideas incorporated as well, mostly to great effect. Burning In Heaven, Melting On Earth is an imperfect album, with enough moments on top of the aforementioned awkward song that hold me back from full-heartedly championing it, but it's one I can certainly see myself revisiting a lot this year, and it's one that reveals Sunnata to be a bold and creative force, pushing boundaries whilst many other acts in the genres that they derive influence from are content to stick with tried and tested formulas.

Written on 27.02.2021 by
musclassia
Hey chief let's talk why not
More reviews by musclassia ››