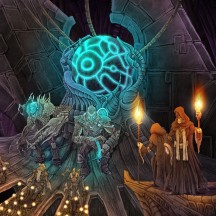 I am very tempted to end the review right there, because that should be enough to make you want to check this out. But not going deeper is a disservice to Ætheria Conscientia... sorry, Æthĕrĭa Conscĭentĭa. This French band are only at their second offering, with a previous full length in 2018, but it seems that they've already happened upon a sound that is pretty unique and identifiable to them. Which I don't need to explain how impactful that is as a reviewer. Sure, there are a lot of parallels to be drawn to other artists that have pushed the same sound forward, from Ihsahn, White Ward to The Great Old Ones. Each with more or less. But the way that Æthĕrĭa Conscĭentĭa weave upon these influences results in a sound that's entirely their own.

First let's take the saxophone. Somehow it seems that the saxophonist, Simon Chttln, is no longer in the band, yet he still performs on the record. Also there are guest performances from White Ward's saxophonist Dima Dudko and vocalist Andrii Pechatkin. So at least on that level, the connection is made. The saxophone has already infiltrated multiple facets of metal, from tech death to post-metal to avantgarde black metal, and even to the point of primarily jazz saxophonist starting metal bands of switching their bands into metal ones, in the cases of Ex Eye and Shining (NOR) respectively. But the way that the saxophone is used here is by fully integrating it within the sound, usually more in the progressive sections rather than the black ones, but it switches from the foreground to the background to silence with ease.

The saxophone gimmick aside, the black metal that Æthĕrĭa Conscĭentĭa approach is almost more progressive than it is black, but they can hold their own in the menace of the shrieks. More concerned with creative an almost dramatic narrative feel with their atmosphere and song structures, in a way combining the melodramatic avantgarde of acts like Ihsahn, Arcturus and Dødheimsgard, the long form progressive nature of Enslaved with the atmospheric focus of bands like Oranssi Pazuzu and Wolves In The Throne Room. The progressive sections often have the black metal dial back to just a mere ominous background presence, having the dance between the exotic guitars and the blaring saxophone be the main focus, before exploding back into blasting black metal. But even at it's most ravenous, the black metal here is melodic, polished, dramatic and progressive.

Though it is undoubtedly, it's great to hear more of this take on cosmic black metal that is in pretty stark opposition to Darkspace's, as much as I love that one. This is full of adventure, instead of full of the endless, lonely, oppressive void of space. Probably due to finding out how to travel beyond the speed of light.

Written on 19.05.2021 by
RaduP
Doesn't matter that much to me if you agree with me, as long as you checked the album out.
More reviews by RaduP ››