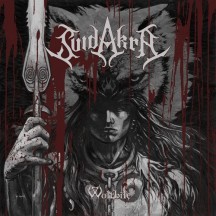 
Mastermind Arkadius Antonin was never a quitter. After more than 20 years of churning out melodic death with folk elements, putting together killer live shows, and releasing a fair share of fantastic albums along the way, Suidakra are at it again. The sting of their previous underwhelming work Cimbric Yarns may still be fresh, equally for them as for you dear reader. So what now? Does Wolfbite bring "the other German bards" back to form? The short answer is yes. The long answer is well, read below.

The traditional folk elements Suidakra are known for incorporating are still a part of their music, however, the main driver here is the powerful melodic death melodies that took the world by storm at the start of their career. As always, Arkadius knows how to surround himself with great musicians. That is why Sebastian Jensen is still there to add depth with his clean vocals on top of the additional guitar work. A special mention to multi-instrumentalist Ken Jentzen, who dropped his bass guitar and ended up behind the drumkit on this album. Meanwhile Tim Siebrecht is back in the lineup to assume bass duties once more.

The songs have an aggressive edge that delightfully whisper "in your face" with all the blistering might of Suidakra. "The Inner Wolf" is one of the most intense pieces they have recorded of late. The same applies to "Vortex Of Carnage". It is a "take no prisoners" kind of attitude that will delight longtime fans, as it has been slightly lacking recently. The instrumental "Crossing Over" is perhaps the bolder track with its catchy melody and irresistible buildup. Songs such as "Resurgence" and "A Shrine For The Ages" are powerful storms of folkish melodic death that bring back memories of the Signs For The Fallen and Caledonia albums, respectively.

The only major drawback is the album short running time of 46 minutes, which in itself is not the end of the world, but somehow leaves a longing taste of unfinished business. It feels like Wolfbite is missing another proper song or two to clinch the ultimate prize it was destined to get. Nevertheless, Wolfbite sounds like Suidakra are trying to make a bold statement of relevance. Well, it is working guys. What ends up being a strong release, even by their standards, deserves your full attention.

Written on 25.07.2021 by
Dream Taster
Bringing you reviews of quality music and interesting questions such as: