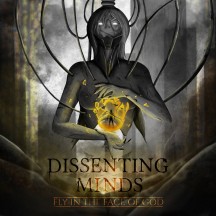 
Dissenting Minds aren't quite flying in the faces of the metal gods with this album, but they have released a very promising debut record.

Fly In The Face Of God is the first album to come from Greeks Dissenting Minds, a trio featuring ex-Revolted Masses vocalist George Triantafyllidis amongst its members. I'm not particularly familiar with Revolted Masses, but I did hear last year's album, and if that's reflective of their material when Triantafyllidis was in the band, then Dissenting Minds represents something of a departure, as in the place of the alt/proggy thrash on Rise, listeners are treated to a dense mid-tempo black metal sound on Fly In The Face Of God. The group's Bandcamp bio states that Dissenting Minds play a heavy/black metal style infused with death and post- elements; the album isn't as unique-sounding as that bio might suggest, but some of those additional elements can be heard within the black metal framework from time to time.

As far as points of reference go, the bands that came to mind most frequently when spinning this record were Schammasch and Regarde Les Hommes Tomber, although that might be at least partially down to the tone of Triantafyllidis's vocals: hoarse lower-register blackened roars. They're impressively easy to understand, emphatic and bring a lot to the sound of Fly In The Face Of God, fitting well with the density of the instrumental mix; the guitar work is primarily rooted in the lower registers pitch-wise, although there's also sharp high-pitched leads sometimes laid on top. The tone of the riffs, whilst intimidating, also has a touch of melancholia; opener "Born Blind" in particular has a sense of sadness to it, which is accentuated by the sorrowful melodic guitar work (lead and acoustic) towards the end of the song.

In a period where an unusual number of new releases seem to be sailing comfortably past the hour mark, it's nice to encounter an album that values brevity. Running just over the half-hour mark, Fly In The Face Of God is compact, with no song exceeding 5 minutes. As such, there's not much scope for the post-metal influences indicated in the band's biography to come through; however, there's still room for some well-implemented contrasting of dynamics. "Isolation" and "Deliverance" both alternate their doomy central chorus/motif with atmospheric bridges, whether acoustic or more post-rock-oriented; each time, the two ends of the spectrum are well-balanced, with the softer stretches effectively contrasting the metallic moments, whether sinister or sombre. However, just as many, if not more, of the songs are more linear and direct. My personal highlight, "A Dark Purpose", shoots by in a blitz of blasts and frantic chants in the memorable chorus, whilst "Arcane Shadow" drives forward through a few different murky riffs without a second's pause.

The sound across most songs is fairly consistent; you find murky riffs and anguished cries combined with occasional melodic guitar work, and most of the songs operate primarily in the mid-tempo range, although Dissenting Minds can shift up to blasting pace or down to a more doomy trudge when necessary. There's relatively few moments that deviate from this template, although the blackgaze tone during the outro of "Thanatophobia" caught me out on each replay. However, a perk of releasing a shorter album means that there's less need to shake things up to keep a fresh feeling, and instead Dissenting Minds can focus on putting out their best songs, and it feels like they've done that here. Each song is powerful, with memorable hooks and potent atmosphere. The melodic moments scattered throughout are always welcome, often playing into the melancholic tone of them album but also adding some menace when needed, particularly with the Egyptian-themed leads on "Isolation".

For a debut record, Fly In The Face Of God is a really well crafted album; it's filler-free, well-paced and feels relatively distinct without seeming to do anything too unusual. It does begin to feel slightly same-y towards the end, which is somewhat exaggerated by some of the overlapping lyrics across songs (a downside to the vocals being unusually clear for black metal), so Dissenting Minds might want to explore those influences they mention a bit further on subsequent albums to add a bit more range. However, for a first offering, I can't really ask for more; I thoroughly enjoyed Fly In The Face Of God.

Written on 25.07.2021 by
musclassia
Hey chief let's talk why not
More reviews by musclassia ››