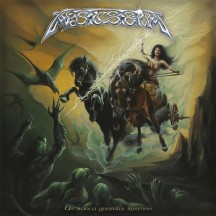 
From The Ancient Chaos originates epic thrash metal, speed metal, hardcore punk/crossover, and classic heavy metal. This is a matryoshka doll of an album from Russia's Mystic Storm. The more you open, the more you find.

What do you find?

The ughs - that Thomas Gabriel Fischer should be proud of - and the screams of a lady named Anya, who blows male thrash vocalists out of water and reminisces the one and only Dawn Crosby. You also find razor-sharp lead guitars, a huge bass sound, and riffs galore. And, last but not least, you hear swords clanging. In a thrash metal record. How often does that happen?

'80s references aplenty - the possessed howl of the opening track mirrors the one by Tom Araya on "Evil Has No Boundaries" and the beginning of "Riddle Of Steel" sounds influenced by "Welcome Home (Sanitarium)" - From The Ancient Chaos brings to mind classic thrash albums with frontwomen; most prominently Détente's - Recognize No Authority of course (there is even a cover of "Vultures In The Sky" as bonus track), but also Sentinel Beast's - Depths Of Death and Znowhite's - Act Of God up to a point.

One of the things I really enjoy with this one is the piercing sound of the lead guitars. They are really high in the mix and they mean business; the leads of "In The Throes Of Evil" and of the instrumental "Along The Coasts Of Stygia" are good examples. The riffs also mean business, both when they are unrelenting and furious but also when they gallop without exceeding the speed limit. The opener, "Nightmare", greatly combines the two and I also like how the necessary mood-setting introduction is incorporated in the actual opening song, instead of adding a worthless intro in the tracklist like so many albums do. "Clang Of Swords", which comes next, is my favourite and the very definition of the epic thrash metal tag I gave the album in the beginning of the review. It is generally great to listen to a band that is focused and on point both on the songwriting front as well as on how they build the album and the song sequence. You need to listen how "Clang Of Swords" bleeds into "Riddle Of Steel" or how from the mid-tempo outro riff of "Beheaded" Mystic Storm introduce the groovy intro of "Ritual" and then pause for a second to prepare you for the mosh pit moment that is coming and you were so badly waiting for.

If you like both Nuclear Assault and Bathory, and don't suffer from severe hearing problems, this one should tickle your fancy. In fact, the band covered "Home Of Once Brave" for The Endless Cycle Of Total Destruction (A Russian Tribute To Bathory) earlier in the year. From The Ancient Chaos is both epic and badass, and could easily be mistaken for a cult '80s album, without sounding derivative in the slightest.