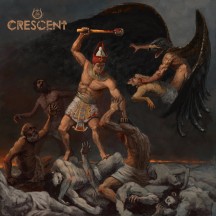 
A continuation of The Order Of Amenti.

I jumped on this as quickly as the locusts ate away the crops in the book of Exodus. Ok, maybe that analogy sounds a bit weird, but it still tells you how excited I was for this latest piece of work from Crescent. Back in 2018 I put The Order Of Amenti in second place on my end of the year list. 2nd out of 225 albums is quite impressive. Can Carving The Fires Of Akhet reach the same heights?

No. However, this new album is still a very impressive record. And (let's get this out of the way already) one I easily recommend giving a listen.

Let's start with the production. This is the first reason why I spoke of a continuation of The Order Of Amenti: it's very similar in quality. Powerful and heavy, but with a stylized style for the melodic parts (especially for the more Egyptian flavoured riffs). The drums are pushed back a bit at times (except for the blastbeats of course). This is similar to certain parts on the previous record, though I feel like it happens a bit more on here. So, there are some improvements still possible there, I think. But, I'm well-aware that this is also a critique that's coming from someone who loves very prominent drums on a record. Vocals are excellently implemented and can fully show their grit and aggressiveness. Great stuff!

On to the performances, then. They're excellent. Visceral and commanding vocals with solid articulation and pronunciation. On top of that, we also get raw riffing mixed with fitting melodic parts from the guitars and bass. Drums that are both frantic yet very meticulous in their execution. The transitions in the songs feel very natural and effortless. A couple of moments to take a breath are also used effectively, whether it's with a small acoustic section or a couple of slower riffs. The best way to describe it is to compare it to a hilly landscape. A mountainous landscape would be too abrupt in pace changes, a hilly landscape is just perfect for this type of record.

The same can be said about the transitions between the songs themselves, though there's a minor remark I want to make here. Compared to the previous album, it feels like Carving The Fires Of Akhet has a bit less distinction between its different songs. They're equally cohesive as a package, but I give The Order Of Amenti the slight advantage.

As for the lyrics, this is where we get that feeling of a continuation of the previous record again. As expected, it's akin in theme (obviously) and worded similarly as well. Solid work, if you ask me.

Carving The Fires Of Akhet is another quality album from Crescent. Furthermore, one they managed to do while I had seriously high expectations for it. This album didn't enjoy the benefit of being my first experience of the band. So, the "wow-factor" isn't necessarily as easy to achieve. Yet, they succeeded in meeting my expectations and reaffirmed their status as one of my favourite bands in this subgenre. Don't miss out on this one!