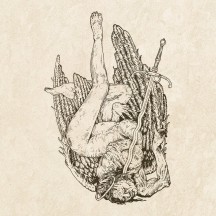 
I have heard the album, and it was fantastic.

The maximalist nature of metal is something that comes up one in a while. The NWOBHM was heavier than 70s hard rock, thrash metal was heavier than that, and henceforth all facets of extreme metal tried to outdo one another in some way. What Sermon Of Flames are up to, is trying to figure out exactly where this abrasiveness leads to. Initially starting out as something closer to raw black metal, think more Novae Militiae rather than Lamp Of Murmuur, but with a clear penchant for noisiness. Mixing metal with noise is not really a novelty anymore, but especially on I Have Seen The Light, And It Was Repulsive, it's more than just adding a layer of noise, but about interweaving death industrial noise into a maximalist cauldron that spews extremity.

And this kind of extreme metal noise has some similarities to Anaal Nathrakh, Knelt Rote, and Vessel Of Iniquity, while also merging the dissonances of Deathspell Omega, Blut Aus Nord, Hissing, and Portal into a swarm of maddening riffs. The album sits pretty equally at the Venn intersection of death metal, noise, black metal, and industrial, not really letting any of those four elements take too much precedence over the rest, but the order in which I enumerated them is my best guess at the ranking of each genre's slice of the pie. But the fact that it's this hard to really tell them apart is a testament to how great of a job Sermon Of Flames did at tangling them into the sound here.

And even if I did all that talk of maximalism, I don't feel like I Have Seen The Light, And It Was Repulsive is to just create an album as extreme as possible, otherwise it would just be a fun experiment and an endurance test, but the sonic architecture at play enhances a somewhat apocalyptic soundscape out of it. The band know when to pull back just a little to let a more atmospheric riff do the work, or when to leave the metal out of it altogether, and even some of the ambient sections don't necessarily favor abrasiveness over anything else. There are plenty of brutal death metal riffs and low underworldly vocals, but also pummeling industrial black metal, swirls where everything mixes together into a whirlwind of nihilistic anger.

Written on 21.09.2021 by
RaduP
Doesn't matter that much to me if you agree with me, as long as you checked the album out.
More reviews by RaduP ››