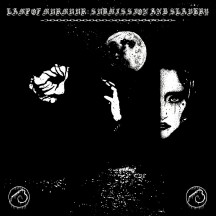 Yes, I know that's a tribute to the Floodland's album cover rather than plagiarism. Nobody is going to think that Lamp Of Murmuur just happened to have the exact same concept. I just find it weird that, if you're gonna go that big on paying tribute, having a cover of a different goth rock band instead of a Sisters Of Mercy cover seems odd. Is the next Lamp Of Murmuur album going to have an album cover that's an exact recreation of Catastrophe Ballet and close with a cover of "This Corrosion"? Or is it gonna be another goth rock act that's gonna be covered? Do we start placing bets on which The Cure song is going to get covered?

Tributes aside, goth rock has been a steady element of Lamp Of Murmuur's take on raw black metal since the beginning, always aiming for a very passionate "romantic" version of it. With raw one-man black metal bands like Këkht Aräkh, Ifernach, Saidan, Hulder, Pa Vesh En finding new ways to breathe new life into the genre, it seems that Lamp Of Murmuur manage to attract the most promise, even from before the project had launched any full lengths. We've covered demos, albums, and splits from the project, and we don't want to turn into Lamp Of Murmuur's official chroniclers, but on Submission And Slavery, and its counterpart, Punishment And Devotion, take the goth undertones into overtones.

From the pianos on the interludes, the post-punk-ish guitar melodies, that one squeaky clean guitar solo on "Deformed Erotic Visage", the bigger emphasis on synths, it's almost as much goth as it is black metal. If the project always had these goth sounds and even fully explored them on the Dead Can Dance cover on the debut full-length, here they have a lot more space to be explored. There are moments that are fully black metal still, but the creeping synths and melodies never linger out for too long (it seems like the more conventionally black metal tracks have been left for Punishment And Devotion, which is a banger too). Complete with a Christian Death (hey, nice to remember that we have them featured), the goth rock parts take a bit more of a deathrock vibe, with some sounds bordering on the punkish side too. But overall, Lamp Of Murmuur hit big on both melodies and atmosphere.

Written on 30.09.2021 by
RaduP
Doesn't matter that much to me if you agree with me, as long as you checked the album out.
More reviews by RaduP ››