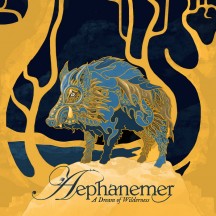 
Another Aephanemer album, another gorgeous artwork and another great record.

2019’s Prokopton was something of a breakthrough for the French four-piece, receiving far more attention both here and elsewhere than their debut Memento Mori and ultimately leading to their signing with Napalm Records. It’s not hard to see why; combine a hyperactive melodeath/extreme power metal style in the vein of the likes of Children Of Bodom, Kalmah or early Wintersun with a symphonic approach and hints of folk, and you find yourself in a position on the metal Venn diagram that is going to appeal to a lot of people. If you then back up that stylistic mix with good songs, impressive packaging and quality production (Prokopton was mixed by the legendary Dan Swanö), then the stage is set for a strong upward trajectory. Here to solidify that growth now comes A Dream Of Wilderness, an album mixed by Dan Swanö and adorned with a beautiful nature-themed cover art, immediately ticking two of those three boxes. Thankfully for those converted by Prokopton, the other box (good songs) is also firmly ticked here as well.

As I indicated above, the base of Aephanemer’s sound is closer to extreme power than melodeath; some reviewers also label them as symphonic black, due to the presence of symphony-mimicking synths and the blackened tone to Marion Bascoul’s shrieks/growls. However, I wouldn’t say that anything in the instrumentation is particularly blackened; quite a few of the melodic riffs use a lot of tremolo, but it’s not in a black metal manner. Despite the intensity that can appear on occasion courtesy of blast beats or tremolo riffs, the tone of the record is very bright and melody-oriented, even without the synths’ contributions; the more aggressive parts feel closer to a Mors Principium Est than anything blackened.

As far as the symphonic aspect of Aephanemer is concerned, it is primarily dominated by synths replicating violin sounds (for example, listen to the opening of “Le Radeau De La Méduse”), although occasionally they resemble other orchestral instruments, mainly during the more extended breaks. The other major factor are the operatic female vocals that trade off with the blackened lead vocals in key moments, such as in the chorus of “Antigone”. Whilst not being fully symphonic in the way that an Epica or Septicflesh aspires to be, it feels more committed and developed on that front than bands tagged as symphonic like ...And Oceans. They also add an exciting and dramatic flair to a music style that is already exciting and dramatic; the emphatic main riff of “Antigone” gets the album off to an emphatic start, but the operatic vocals in the chorus add an even grander dimension to the song, as do the blasting synths and chorals during the blistering solo.

The folk is less of an obvious presence, but “Of Volition” definitely sounds at times like it could have appeared on an old Ensiferum record, as do a couple of other tracks or snippets. Still, whilst the folk moments and symphonic flamboyance bring a lot to A Dream Of Wilderness, it’s that extreme power/melodeath foundation that Aephanemer deliver so well. The likes of “Le Radeau De La Méduse”, “Roots And Leaves” and “Panta Rhei” feature fast driving riffs, memorable guitar leads and sharp melodic hooks, all of which come together in an exciting and entertaining manner. Songs such as “Antigone” are fairly straightforward structurally, but Aephanemer do show some exploration on the longer songs, with “Roots And Leaves” sprawling out after the halfway mark (rounded off with some nice keyboard, one of few chances it has to take a leading role) and the closing title track featuring an extended symphonic bridge leading into a grand climax of the record.

I feel like I’m mentioning it every other week at the moment (hopefully I’ll have to write it once more with In Mourning’s impending new album), but 2021 has been a very strong year for melodeath, and Aephanemer is more than keeping up with the competition. Aephanemer solidify their breakthrough success by bringing their A game on their major label debut; A Dream Of Wilderness is electric, flamboyant and a lot of fun.

Written on 24.11.2021 by
musclassia
Hey chief let's talk why not
More reviews by musclassia ››