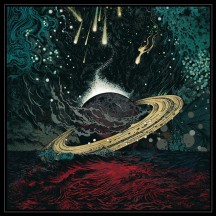 
A pendulum does what it does best. It swings back.

When I reviewed Cave In's previous album, 2019's Final Transmission, I was pretty convinced that would be, as the title seemed to imply, Cave In's final album. A return-to-form album that morphed into a tribute to the late bandmate Caleb Scofield, who passed away during the making of the album, whose last sent demo served as the album's opener as "the final transmission" and whose demos served as a backbone for most of the record. It's easy to see why one would think that Cave In would do their best to honor Caleb's memory and then move on to their other projects like Old Man Gloom or Mutoid Man. And yet, here we are.

I'm still not someone who has a very strong attachment to Cave In's old albums, so I feel more compelled to compare the experience of listening to Heavy Pendulum to the experience of listening to Final Transmission. The latter, as great of an album as it was, it was still an album permeated by the context of its creation. Like other posthumous albums, it was doomed to have to use whatever demos were recorded by the late member to create something out of what was left. Fitting tribute within the context, but something that can cut away from the album musically when detached from its context. Heavy Pendulum suffers from no such thing. It is just Cave In doing what Cave In do best. And because I got into Cave In so late, it might actually be my favorite Cave In experience.

Sure, take what I say with a grain of salt, because even when I saw them live and when I reviewed their previous album, I admitted to not really clicking with their music. So maybe it was just that it was now that it finally finally really clicked. But Heavy Pendulum really is a banger of an album, one that showcased the idiosyncrasies of Cave In's sound in a way that feels more fleshed out. From the hardcore leanings, the post focus on large atmospheres, the Alice In Chains-ish alt melodies, the space rock grooves, the punchy sludgy bass from new member Nate Newton (Converge / Old Man Gloom) that brings the sound closer to Mastodon, to nods to prog rock. These were already staples of their sound previously, but this time around I feel like it dives deeper into the Failure-ish grunge sound, while also being their sludgiest.

The album is quite long, and not all of it really justifies its runtime, but I found that listening to Heavy Pendulum makes time pass quicker than anticipated. This is just a fun time, and considering how the previous album was permeated by loss, this one does genuinely feel permeated by an uplifting creative passion. It covers a lot of ground and there aren't a lot of moments that feel close to being bloated, so I can't really blame them for not cutting more out of it. And when the Kurt Ballou mix makes everything feel so intense and fitting for this album that it's hard not to get immersed in it regardless. Where I think the album really wins is in that fact that it gels so well together. Whereas previous Cave In records and their performance gave me the feeling that their experience can be off-putting given the expectation of either more hardcore or more alt stuff, but Heavy Pendulum is so charming in how it gets the experience right that I can't imagine needing that much time to click with it. Maybe there's a reason why this was the album to finally make Cave In click for me.

Though I dread the thought that the pendulum would eventually have to swing back, I can just abandon that metaphor completely and say that Cave In live.

Written on 25.05.2022 by
RaduP
Doesn't matter that much to me if you agree with me, as long as you checked the album out.
More reviews by RaduP ››