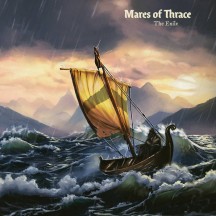 
When returning after a decade’s absence, naming your comeback album The Exile seems rather fitting.

Canada’s Mares Of Thrace are a duo, but not the same duo that they were on their last outing; since 2012’s The Pilgrimage, drummer Stef MacKichan has departed, a consequence of the distance between her and vocalist-guitarist Thérèse Lanz as work took them in separate directions. In her place is Casey Rodgers (also handling bass duties), who played with Lanz previously in deathgrind band Exit Strategy. It’s rare to have a situation where replacing one member represents a change in 50% of a band’s line-up, but despite being low on personnel, Mares Of Thrace make plenty of noise.

If you’ve never encountered this band before, you probably looked at the artwork and thought, like I did, that this would be some kind of folk or Viking metal album. Well, prepare to be deceived, as The Exile is, above anything else, a sludge record. It makes no pretensions about this; immediately after one presses play, the duo kick into a dirty bluesy riff, with Lanz unleashing her strained hardcore rasps. Between the hefty doomy riffs and the slick Southern guitar leads, “Onward, Ever Onward” is straightforward, if perhaps stretching its few motifs out to the limits (or beyond) of their lifespan.

Although The Exile (at a slimlined 35-minutes) is a no-nonsense record, it’s not merely one-note by-the-book material. “Dark Harbours” shows off a softer side to the band, with an extended clean opening accentuated by some delicate ethereal clean singing, although eventually there are tasty riffs to get stuck into. Not only does this track (and “Offerings Of Hand And Tongue, which immediately follows it) exhibit the melodic range of the band, but the intensity, urgency and progression of its riffs help to avoid the pitfalls that “Onward, Ever Onward” falls into. “Offerings Of Hand And Tongue” goes the other direction in terms of energy, opting for slower, doomy contemplation, but the dynamic and stylistic range (with post-metal and metalgaze inclinations) again keep it sounding fresh until the song ends.

The Exile is a solid record, and when it’s on form, Lanz and Rogers hit hard; there’s a knockout riff about a minute into “In All Her Glory” that makes for irresistible headbang material. Still, considering it’s only 35 minutes long, there are a few moments where the album does start to drag; I’ve already alluded to this with “Onward, Ever Onward”, and I also get it a bit with “Mortal Quarry”. On top of that, there’s not quite enough of the album that blows me away to offset that. As a result, The Exile falls into the ‘good, but not quite great’ category for me. Still, if you’re looking for dirty riffs in a concise package, you could do far worse.

Written on 06.06.2022 by
musclassia
Hey chief let's talk why not
More reviews by musclassia ››