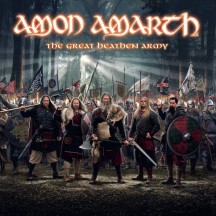 
A shoddily conducted, atrociously produced, unamusing raid. All that glitters is not gold.

Regaled by the tales of glorious raids past, Björn Jätteyxa donned his scalemail, equipped a battleaxe in his belt, lit up his tobacco pipe, and set sail for the shores of Amon Amarth. "Surely," he told his crew, "there must be spoils of war yet left to reap in their domain. To Valhall!" His crew, composed mostly of warriors who already knew the lay of the land, met his enthusiasm with quizzical looks of hopeful skepticism, and put their oars to the water.

Upon arriving, Björn's second-in-command, crossbow legend Magnus Pilspruta, immediately noted that something was off. "I don't like the looks of this," he told Björn. "This looks way too easy, like they're not even putting up a fight. Is there even any loot here for them to defend? This place used to be a bloodthirsty, heart-pumping, searing battlefield on steroids. Where's the action at?"

"Booze, jewellery, and women," said morale officer Karl, whose surname has since been lost to history. "That's all I'm here for." The majority of Björn's raiding party tended to agree with Karl, simply because you don't mess with the four-years-straight champion of Vikingstad's annual berserker mushroom-eating festival.

"Come now, brothers and sisters," said Björn, "these are supposed to be legendary raiding grounds, are they not? Many a viking professes their love for burning, looting, and enslaving on these particular shores." Taking a heavy puff of his tobacco pipe while examining the city sprawling before him, Björn gripped his battleaxe and raised his voice. "Many a skald muses about our previous accomplishments here. Many a viking, in turn, lifts weights and does cardio to the sound of said musings. Cheer up, Magnus, and hands off the mead, Karl. To Valhall!"

Magnus would turn out to be right, however. Amon Amarth would turn out to be a tribe on its last legs, and the raid would turn out to be a complete slaughter. Something in the air made Halvdan's pounding war drums drown out everything else, and Karl had a disappointed look on his face from the very first muddled screams of his first poor victims. Having conquered the first and second trite and tired city slopes, The Great Heathen Army at last found some satisfaction in raiding the mead-filled "Heidrun" district, which nevertheless Magnus remarked looked and tasted just like a paler version of Svartsot, as if somebody had put Mulmets Viser through a Eurovision wrangler. Karl wondered what Eurovision was, and was happily left ignorant as he ate another fly agaric and smashed a few more heads.

Björn could not contain his disappointment as The Great Heathen Army at last reached the end of "The Serpent's Trail". Amon Amarth sure wasn't what Halvdan the skald had made it out to be; what little loot he came across turned out to be meretricious, any value having been absolutely ruined by production values so washed out that all that glittered was merely caricatures of gold. As he left the burning city behind him and made his way back to Sweden, Björn had a mental breakdown. "How can it be," he asked Magnus, "that what once was the very definition of 'war metal' can be so diluted that what little enjoyment that could be found from this experience is utterly crushed by its very appearance?"

"Label interference? Commercialism? Andy Sneap (Judas Priest, Megadeth, Accept)? Only Mímir knows. This was indeed an amazingly average raid at best," said Magnus. "I did have some good times, particularly in 'Heidrun', but there was nothing memorable about it, really. The battle I've seen here today has already been done better by both Svartsot, Amon Amarth themselves, and an odenzillion of other tribes." Magnus sighed, oiling his trusted crossbow out of sheer boredom, though it had barely been used. "Besides, I hurt my toe on the stray guitar line that heralded our battle between 'Saxons And Vikings'. At least I'll remember that one. Not bad, but not good either."

"Don't worry, Karl, the guitars sound so weak and lame that it can't have done any damage," said Björn. "Their cover art is pretty neat, though, I'll give them that."

Karl would later go on to write an epic poem about the boozelessness of The Great Heathen Army, and finally got his booze, gold, and women. Disillusioned, Magnus started listening to pop and hip-hop, and Björn threw himself into the local ättestupa.