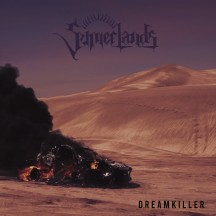 
Do you like your heavy metal to be as smooth as possible?

Maybe "smooth" is not quite the right word for it. But there's something in the 80s worship of Sumerlands that feels very effortless. Even back on their debut six years ago, their self title felt warm and gentle. There's also something about the supergroup nature of the band, with members also being or having been part of other bands like Eternal Champion (three of them actually), Innumerable Forms, Dream Unending, and Magic Circle. There have been some lineup changes, an expansion in the form of actually having a bassist (Eternal Champion's Brad Raub), and a replacement on the vocals front (ex-Magic Circle's Brendan Radigan replacing Briton Rites' and ex-Hour Of 13's Phil Swanson).

Obviously one of those two had a bigger immediate impact on Sumerland's sound, with Radigan's Ozzy meets Geoff Tate vocals being the biggest point of contention I can see about the record, whose style can get a bit monotonous and grating especially for those not especially fond of that late/post-NWOBHM era of heavy metal. That goes also for the entirety of Sumerlands' music, but especially about the vocals, as it polishes a lot of the roughness that can come with heavy metal, hence the "smooth" I used in the teaser. Don't get me wrong, Radigan is a pretty great vocalist, and a lot of what's great about Dreamkiller comes from his performance, but also him not being top tier is also what lets the monotony drag Dreamkiller from its true potential.

Vocals aside, the smoothness in Sumerlands' music leaves room for the amazing sense of melody from the band to shine through. Sitting at the intersection between the latter stages of NWOBHM, the glitter of some anthemic AOR-tinged radio metal, a touch of the first steps of US power metal that would soon threaten to birth prog metal but is not there yet, Dreamkiller has a lot to appeal to in a retro heavy metal niche. It's not just the niche, but Sumerlands write some damn catchy songs while at it. Plus, it's not like it isn't filled with songs like "The Savior's Lie" that blend the epic and the gloomy, while the keys keep bringing melodic highlights over the record alongside the obvious guitars and vocals.

Dreamkiller brings a bit more of an AOR influence than the band's self-titled debut, which comes down to both the writing and the new vocalists' performance. Make of it what you will, as for me it does make me like Dreamkiller marginally less than Sumerlands, but since that's such a high standard to reach, it's still maintaining the band's stance as one of the best that can be found in the retro-heavy field.