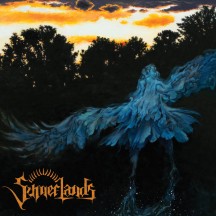 
This isn't tight jeans, big hair, "coke off a stripper's ass" heavy metal. But it'll blow your mind in the same way without you really realizing quite what's happening. No, this is "walk softly and carry a big stick" heavy metal.

Sumerlands' is a warm, gentle, dark sound. Dark, and heavy with a doomy mood. There's almost, almost, a retro fuzz in the air, coating the music in an imperceptibly thin layer of haze. Guitar solos are sensual, while the riffs are confidently, gently dominating. The record is wonderfully guitar-driven, though the drumming is a vital organ to this beast; never simply keeping time and always decorating the timeless tunes with luxuries we didn't know we needed but now cannot do without.

This debut features experienced personnel, with Arthur Rizk (Inquisition, Power Trip, Pissgrave) on guitars and Phil Swanson (formerly of Hour Of 13, Atlantean Kodex) on vocals. And what vocals: his dark, sometimes melancholy, sometimes classic Ozzy-inspired, mid-range voice adds the perfect narration to this enduring record. He is the final piece of the puzzle and a huge reason Sumerlands works so wholly and completely.

Sometimes with classic heavy metal, counter to popular theory, slow and steady wins the race. With so much well-crafted mid-tempo, you won't be jumping around bouncing off the walls to this traditional band, but you'll be nodding that head with such immense satisfaction and absolutely playing the record again. It's a short one and leaves you demanding more. Repeated listens reveal intricacies in the seemingly straightforward songwriting that one may not have taken in on the first pass.

Both the maturity and the timelessness of this record are difficult to fathom. If this was released 5 or 30 years ago it would kick just as much ass and be just as solid as it is this very day. It's vintage without the musty smell: this does not feel dated for a second, but neither is it merely an homage. The mature sound, astute songwriting, and worthy performances assure us of that.

Written on 16.09.2016 by
Susan
Susan appreciates quality metal regardless of sub-genre. Metal Storm Staff since 2006.