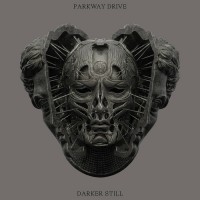 
Out go the lights.

It's been a long time coming for Australian breakdown addicts in metalcore outfit Parkway Drive. After a decade of building momentum with a series of genre-transitioning albums, they seemed to have reached a whole new level with 2018's Reverence. With the band's glory ride cut short owing to live music going into enforced hibernation, the band pick up the slack and aim to make up for lost time with Darker Still.

While I've always found the band to be floating in my peripheral vision in terms of interest, they have been capable of producing tracks that easily become of the centre of the attention thanks to the solid musicianship within the band. It is perhaps a bad omen that Darker Still is perhaps the first release that only features one lone track that does this.

While this may place a ceiling on the quality of an album, this isn't to say that it is a bad album. The aforementioned musicianship is still prominently featured, with Ling and Kilpatrick throwing out some decent riffs in tracks like "Glitch" (with a riff that just compels you to stomp) and "Land Of The Lost". The latter track also features a good breakdown and solos; all while McCall's powerful vocals weave all the tracks into one solid unit.

The crowning achievement however has to go to the title track. A slow and moody ballad that crescendos with some excellent guitar interplay with orchestral flourishes, it makes you wish the album features more tracks with this level of effort and impact.

Darker Still has the kind of production that could propel stronger material into the stratosphere, with a powerful and well-balanced mix allowing each element to shine, but not overshadow each other. McCall's vocals and Gordon in particular sounding like a swinging wrecking ball waiting to knock you off your feet.

It is, alas, that I have to stop dancing around the core issue with Darker Still, that it just lacks in quality songs. The ceiling on this album is that the songs are OK; listenable if not particularly enjoyable, but thankfully not bad (well, save one track anyway, "If A God Can Bleed"). A good example of this is "Like Napalm", a track which has a pumping rhythm, but nothing to build on it, a limp "burn it, burn it all away" refrain being a damp squib instead of an incendiary moment.

No other track other than the title track is able to bring together for the solid musicianship without some kind of caveat. The guitar work on "Imperial Heretic" may well pique your interest, but the rest of the track is just, well, "meh". McCall sounds powerful and compelling, but the lyrics are bottom of the barrel metalcore clichés. The band seem to have landed upon the perfect balancing act, with the good elements counterbalanced by the bad elements (hell, the one great song is even counterbalanced by one bad song), meaning the album levels out in the middle.

Darker Still may not be the worst album in the band's discography for many as it is more likely to evoke indifference than dislike for listeners, but it is unlikely to be the first album that comes to your mind when thinking of Parkway Drive; rather it'll be the one album that's lost in amongst your record collection.

Written on 26.09.2022 by
omne metallum
Just because I don't care doesn't mean I'm not listening.
More reviews by omne metallum ››