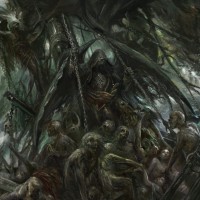 
Brought Forth In Iniquity is the third release by the Norwegian death-doom act Abyssic. Unfortunately, in recent years, I've found death-doom to be an increasingly stale genre, with the same slow-to-mid-tempo-ranged riffs, the typical death growling, and the usual crushingly heavy tone. Abyssic's Brought Forth In Iniquity seems to be an exception for me in this matter; let me explain to you why.

Just as you'd expect, the death-doom elements still very much continue down the same route as its predecessors, with its devastatingly heavy tone, crushing riffs, and intense atmospheric build-up. If you think, however, that this is going to be just another regular death-doom release, one that will simply fall into the same bracket as many other bands of the genre in recent years, then perhaps you should think again. Abyssic not only manage to provide the typical classic death-doom template, they accompany it with some truly stunning symphonic work. Perhaps this shouldn't come as much surprise though, since Abyssic consists of several members who were formerly with the symphonic black metal bands Dimmu Borgir and Old Man's Child, as well as Funeral, so you will likely hear similarities in style from those bands throughout this album.

This is one of those albums in which the symphonics are constantly present throughout the entire album, and not just for the background sake either, they are crafted, layered, and then mixed so precisely with the instrumentation that the whole musical structure simply merges perfectly together as one, with nothing in the mix falling behind. So it's quite the genius production, I have to say. On the other hand though, I have to admit the vocals do get kind of tedious and dreary over time, perhaps this is due to the same monotonous tone used throughout the album. Now, whether it's just me being nitpicky I would have preferred a more varied vocal approach, which I believe would have suited this particular style of music more, perhaps clean vocal choruses wouldn't have gone a miss.

There are only five tracks on this album, which has a running time of over fifty minutes, which means the tracks aren't exactly short, but saying that, each track is developed just long enough to allow their powerful flow and momentum to build, only to then unleash their devastating force. As I have said before, this isn't regular death doom by any stretch, you have tracks with a variety of styles, such as "Djevelens Lys" (Light Of The Devil), which has strong elements of symphonic black metal, with its blast beat drumming and beautiful piano passages reminding you of Dimmu Borgir.

However, it's the closing title track that is the longest of the five tracks, and by some clear margin. At over eighteen minutes in length, you would expect this track to be an epic and memorable closer. However, the track does fall short of becoming that epic, memorable closer in my eyes. Although the atmosphere is most intriguing, with a powerful mix of emotions, that go from being depressingly dark, to sheer anguish and despair, it just falls victim of becoming a slog in places, perhaps the length of the closer was a little too ambitious.

To summarize, Brought Forth In Iniquity is quite frankly a beast of an album, with long sprawling tracks with chaotic structures and devastating songwriting. It's, as I have said, not a typical death doom metal release, and ideal for fans who like the symphonic side of extreme metal.