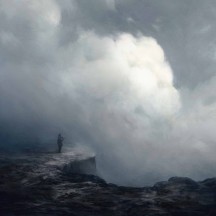 
Add Ofdrykkja to the list of metal bands having opted to cut out their metal elements in favour of pure neofolk. Their depressive suicidal black metal origins are here audible mostly through the introspective, melancholic mood permeating these mostly acoustic Swedish folk-inspired songs. A good soundtrack to dark, snowy winter walks.

Ofdrykkja is an archaic spelling of an already archaic Swedish word, avdricka, meaning something like “to vigorously drink to the last drop”, and while fourth album After The Storm is not the band’s first foray into neofolk territories, it is the most wholehearted one yet. Having started out as a DSBM act, Ofdrykkja made a point of how they were all at rock bottom in their lives; days replete with alcohol and drugs and self-harm. Already on “The Light”, there appears to be some, well, light, shining through, suggesting maybe the outlook is not quite as bad these days. It is an introductory, slow-building piece, half of it just acoustic strumming before Miranda’s layered vocals chime in to chant “Light will shine on you / Be true” over soft strings and male backing choirs. “The Light” does a good job of introducing the various elements Ofdrykkja will go on to use throughout the album, and is a pretty if somewhat nondescript piece of music.

Following this intro song is a cover of the Swedish folk tune “Hårgalåten” in a very true-to-its-roots neofolk adaptation (meaning it is quite unlike the version In Flames popularised way back on their debut album). The song is driven by a moody key harp and frail female vocals over acoustic strumming and shamanistic toms, telling the tale of how the Devil disguised himself as a violinist to lure the youth of the Hårga people into doing his bidding. The orchestral arrangements sound very authentic, like proper folk music, and the Swedish lyrics top the Nordic vibes off very well. This kind of music goes straight into my bones and I start imagining how people sat where I am sitting now hundreds of years ago playing and singing tunes like this one around a campfire.

On the following tracks, it becomes apparent to me that the basic idea of this album is not really to play neofolk, but to create a sparse, sombre mood for reflection with a Spartan use of acoustic guitar somewhat similar to Agalloch’s many instrumentals on The Mantle, and then infuse this soundscape with dreamy, layered vocal arrangements more or less repeating variations of a mantra. “The Maere” uses spoken-word to tell a story about sleep paralysis (or at least insomnia), and the title track builds further on the vocals introduced in the intro song, turning them into a harmony halfway between catchy and simply pleasant to listen to. There is a hypnotic, meditative quality to it all that never breaks up, even as quietly distorted guitar chords are added to the mix in “The Cleansing”. It really works in Ofdrykkja’s favour that the songs are all on the shorter side of the spectrum, and that the album is only 30 minutes long, because while this is all a very pleasant and emotional listen, the slow pace and introspective mood throughout threaten to make the music drag at parts.

That threat is never truly fulfilled, however, thanks to aforementioned reasons. As if ordained, the instrumental (well, there are vocals, but no lyrics) “Själavandring” (Soul Wandering) ups the tempo and emerges as one of the most memorable pieces on After The Storm. It uses an acoustic guitar motif and lyricless singing which is supplemented by energetic, mid-paced drumming and, later on, staccato strings, just repeating the same passage over and over until it is burned into your brain. The closing song is a bit too long for its own good, with 8 minutes of mostly repeating a single guitar hook over spoken-word reading a poignant letter to a friend about life, death, and what to do in between:

“Know that you are a soul living the human experience. Trust your intuition. With practice, it becomes a compass to guide you through life. If you feel anxious, it means that you're doing something wrong. Silence your mind and feel. Observe your thoughts and change what you can. You know, I had to change a lot. Everything in my life was wrong, and man, did I suffer for it. Eventually I experienced that it is not the incidents or our emotions that create our suffering, it's our reactions towards them that does.”

Good advice for just about anybody, yeah? After The Storm is moody, emotive and a thoroughly pleasant listen. There is no metal here to find, nor should you expect any. At times, the sombre mood and low pace make the music drag for a bit too long, but this is mostly remedied by a short running length and songs that, while building upon much the same elements, are clearly distinguishable from each other in the way they arrange vocals, orchestra, and folk instruments. Highly recommended for them solitary winter walks in darkness.