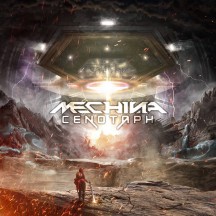 
By this point, the grumbles about the annual New Year’s Day Mechina album are about as predictable as the album itself, but are the grumblings fair, and do things have to be this way?

It wasn’t always so; to begin with, Mechina weren’t even that prolific, with a 5-year gap between albums 1 and 2, while the band took a year off after Conqueror before putting out their second 1 January release in Empyrean. The reactions were starkly different to those heard today as well; look at the threads on the site for their earlier records, even up to 2017’s As Embers Turn To Dust, and even though the concerns over the formula turning stale were increasing in number with each passing record, the overall sentiments were generally positive. Remarkably, the 4-year gap between As Embers Turn To Dust and Siege, during which Mechina released only one record, looked as if it would be ideal for revitalizing their approach and bringing in some freshness, but if anything seems to have accomplished the opposite, as Siege and the releases that have followed feel less inspired than ever.

The formula on 2023’s entry to the Mechina discography follows very much in the footsteps of its immediate predecessors; with 9 songs and an hour-long runtime, the long compositions comprising Cenotaph are filled with relentless industrial/djent riffing, bright dramatic synths, pulsating electronics, and relentless harmonizing of Mel Rose and David Holch’s effects-laden dual vocals. Those components are pretty omnipresent throughout the album; there’s moments every so often where the riffing and percussion intensifies a bit for a few moments, but the only real departure is the instrumental-only “Broken Matter Manipulation”. If you’ve listened to Siege and Venator and feel like you wouldn’t get anything out of an album that extensively covers the same ground, you can feel safe passing on Cenotaph, but are there any specific weaknesses that can be highlighted in Cenotaph?

This is now the third year in a row I’ve reviewed a Mechina album, and the third in a row that I’ve been lukewarm in my ratings, but I did like this band quite a bit once upon a time; both Acheron and Progenitor received fairly complimentary words from myself, and Xenon was a outside contender for my end-of-decade list. When I look back at those Mechina records, the main thing that I really feel has been lacking in the last couple of years is the memorability of songs. When I think of the standout early Mechina songs, there’s ear-catching melodic hooks placed front and centre (“Zoticus”, “On The Wings Of Nefeli”), there’s ‘symphonic’ arrangements that feel focused (“Xenon”), there’s choruses given breathing room to stand out (“The Halcyon Purge”)… I’m just not hearing any of that on Cenotaph. The music on the past couple of albums has tended to blend together, and I’ve found it even more of an obstacle here. Quite a bit of this comes down to the instrumental writing, but arguably the biggest contributor to this is the vocal arrangements.

There was a time when Mechina had some degree of vocal variety; the likes of Xenon and Acheron alternated clean and growled vocals, and at-the-time guest Mel Rose would be given songs to herself to stand out and offer variety from the surrounding tracks. Since Rose became a full-time member, however, not only have the extreme vocals been dropped, but now Holch and Rose are almost always singing together, both with so much synthetic layering thrown on and generally in a very narrow pitch range, and there seems to be little mind for differentiating hooks or melodies between tracks, instead feeling more focused on delivering a constant tone of urgency. It’s frustrating, because Rose’s songs used to be some of the stronger features of earlier records, particularly the likes of “Cryoshock” and “On The Wings Of Nefeli”, where there weren’t so many effects thrown onto her. Now, the dual-vocal approach not only makes it very challenging to remember individual tracks due to the lack of variety or memorability, but it’s a sound that gets increasingly grating across a full record; when replaying through Cenotaph, I really started to feel a lack of tolerance for it by the time I hit “The Haruspex Sunrise” and “Andara’s Will”.

I do feel warmer about the instrumental side of Cenotaph; as much as it is growing stale, there is still some innate appeal to the ‘synths & djent churn’ approach for me, and there are gnarly grooves in “For All To See” and the instrumental track “Broken Matter Manipulation”, while the title track gets closest to featuring some halfway memorable synth hooks. Possibly the most memorable (for positive reasons, at least) cut here is “The Grand Hunt”, which not only has some tasty tech riffs, but a sense of soaring in moments later on that gives me something to latch onto. The major problem here is, as already mentioned, the lack of variety; Cenotaph is crying out for a track like one of the older ones I mentioned above to break the sense of the album being a product of that procedurally generated djent YouTube channel. The unfortunate thing is that the closing song “Andara’s Will” harbours some intentions of delivering this, featuring a brighter, more melodic vibe, which worked well for the title track of Progenitor; however, while there are good moments where this song captures a similar energy to something like Devin Townsend’s Sky Blue record, those dual robo-vocals somehow become even more grating in this new setting.

I’m giving this a lower score than I did either Siege or Venator, but I’m not sure it’s all that much of a downgrade on them; perhaps I was overly generous when reviewing those two records, or perhaps my patience with the anti-memorability of some of Mechina’s current writing has run out. I still want to believe that the band can return to their former highs (however relative one might perceive those highs) and deliver some genuinely exciting and memorable music, but the evidence of the last 3 years has me thinking that maybe this is overly wishful thinking.