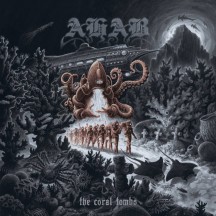 
After a long slumber, Ahab have finally risen like Cthullu. One of the most anticipated doom albums of 2023 has been released within its first fortnight; the question now turns to whether The Coral Tombs justifies those lofty expectations.

For the unfamiliar, German quartet Ahab first made their reputation as a funeral doom band; 2006’s The Call Of The Wretched Sea delivered an entirely different interpretation of the Moby Dick story to what Mastodon created with Leviathan, effectively exemplifying a subgenre that had been developed up to that point by the likes of Skepticism and Evoken. Subsequent albums began to move beyond the confines of funeral doom, particularly 2012’s flirtations with post-metal on The Giant, while still retaining the slooooowness and oppressive weight of said subgenre. This broadly remains the case on The Coral Tombs, which comes 8 years after The Boats Of The Glen Carrig, but with some minor changes in perspective.

The Boats Of The Glen Carrig was somewhat deceptive in how it began, a couple of minutes of clean singing and light instrumentation before Ahab reminded listeners how they built their reputation. In some ways, The Coral Tombs takes the inverse approach; opening with an onslaught of blasts, screams and tremolo, “Prof. Arronox’ Descent Into The Vast Oceans” is likely to leave listeners wondering whether Ahab have dropped the ‘doom’ part of the ‘extreme doom’ label, but such intensity is not heard again on the album outside of this first 90 seconds. On balance, The Coral Tombs is perhaps the most clean-heavy record Ahab have created so far, with Daniel Droste’s morose sung vocals appearing on every track.

I initially struggled with the album on first listens, and wondered whether this early reluctant response to The Coral Tombs was mainly down to these vocals; the soporific singing, particularly when paired with some instrumental sections, remind me somewhat of Patrick Walker on Warning’s Watching From A Distance, a record that I seem to stand relatively alone on this site in not particularly liking. This line of thought left me wondering whether my hesitations over this record could be pinned down purely to a matter of taste, which would be quite an easy ‘out’ if anyone was to disagree with my opinion. After a few more listens, however, I decided this wasn’t an accurate explanation. First, because I did warm to the album as a whole; second, because I also warmed to some of the clean-sung parts. The aforementioned opening song’s extended stretch of gloomy clean singing does build to a fairly satisfying resolution, and the combination of the singing and the guitar melodies helps “Colossus Of The Liquid Graves”, although in possession of some of the best riffs on the record, to become arguably the standout feature here.

With increased exposure to The Coral Tombs, I have started to click more strongly with it, with a couple of exceptions; this is an Ahab album we’re talking about, and there is enough here to remind listeners why that name carries such weight. The other main contender for the record’s best track for me is “Mobilis In Mobili”, which opens with a prolonged eerie passage reminiscent of a faulty music box, under which ominous sustained guitar notes build a menacing atmosphere that the band deliver on with a vicious double bass-driven first main riff. This more energetic and intense riffing, which is nicely reprised later in the otherwise trudging song, offers a nice change of pace, as does a less melancholic sung period in the final moments of this track.

Another satisfying song is “The Sea As A Desert”, a track that relies on a singular main motif for most of its runtime, but thankfully said motif is ominous and compelling enough to keep me engaged, even if the Walker-style singing section later on is a bit too moping for my tastes. The title track is somewhat similar in this approach, but with a far lighter touch for most of its runtime; it is impressive how such a relatively simple basis of sounds manages to retain interest for so long, even if I do feel like it threatens to outstay its welcome at times.

The one song that I remain somewhat unconvinced by, and perhaps the one that drove a lot of my initial ambivalence, is “Ægri Somnia”. Coming in immediately after the already very sedate title track, it continues in the same vein for a long time, and while it is somewhat intriguing in its more intense midsection, the repeated clean sung section that follows combines overly melodramatic vocals with an irritatingly cheesy lead guitar melody. It’s a shame, as the more extreme passage between the two instances of this section is actually pretty atmospheric and sinister.

I do feel like overall the clean vocals are overused on the album; when “The Maelstrom” follows up the ending of “Ægri Somnia” with yet more melodrama, it really starts to test the patience, yet I never found myself perturbed by the vocals on The Boats Of The Glen Carrig, on which there was also a healthy balance of extreme and sung vocals. Ultimately though, I feel like where The Coral Tombs falls short of its predecessors is just in the general level of the album; I do quite like the majority of the music here, as mentioned above, but I find it to be a less engrossing experience than The Boats Of The Glen Carrig or even the more divisive The Giant. The return of Ahab is something to be grateful for, and I imagine most fans will be generally satisfied by The Coral Tombs, but I feel like it won’t be looked back on as one of their finest efforts.

Written on 12.01.2023 by
musclassia
Hey chief let's talk why not
More reviews by musclassia ››